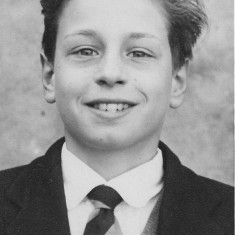 Activities while at school
De Profundis (with apologies to Oscar Wilde!) Memories of Chipping Campden Grammar School My first contact with CCGS was when one Mr A.L.Jones MA Cantab, came to our small primary school in Stretton-on-Fosse to talk to our Head Teacher and interview me to determine whether I would pass muster, after having passed the 11+. Being from another county, I guess he was protecting Gloucestershire Education interests! Abiding memories of a bear of a man, with hawk-like piercing eyes and big beak nose. Sept '57, school uniform (short trousers until third year for me, along with Masters Bate, Court, Gaskell and a few of the other vertically challenged lads). Then there was the trusty school satchel, later to carry up to 10 kilos of books and other paraphernalia. Cold in winter and hugging the school radiators with no prizes for knobbly knees! First Form Teacher was a young Irish guy named Turner and we were in Hut 1A. I thought I was there to learn everything about football after Robert Gardner, my best mate, (sadly no longer with us), had indoctrinated me about Arsenal FC and matters academic soon became of secondary importance. Nary a day passed that I didn't return home with green knees! Redemption subsequently came for the family name with my bro, Robert who joined me at CCGS two years later, and who went on to become Head Boy and thence to Durham. 3T, (under Form Master Mr 'Sniff' Unstead) and my Arsenal graffiti, artistically scrawled into a school desk lid, in association with R. D. Gardner having done the same, (in Rm 3 if memory serves me correctly), caused me to meet formally with one of 'The Boss's' 6 foot long canes. Bent over Miss Hawkin's chair, (school secretary) she having been previously dismissed to avoid witnessing the ensuing carnage no doubt! Yes he did trot out the trite 'This will hurt me more than it hurts you Bullock', and to boot broke the cane on the third stroke, with a 'wait a moment' while he went to recover another from his stockpile in the corner. At a previous morning assembly he had asked for the culprits to come forward, and when there were no takers, he had the whole school return to their positions of the previous day, the period just before lunch, when the crime, I suppose was reported. Confronted with the crime and no exit strategy! Rob got four only, true to his honest Catholic roots by 'fessing up. I got the legendary six, for lying in the face of overwhelming evidence. It was a very formal affair. The whole school was aware that a caning was impending with the culprits on display in the small corridor outside The Boss's office. After the event we were allowed to retire to the changing rooms and inspect each other for damage (no blood drawn, he was an expert!) before we returned to class, duly humbled and embarrassed. Later culprits would consider it a badge of honour! Subsequently and much later in life I read the gazetted citation of Capt. A L. Jones' action in Italy to win the Military Cross. A brave man. Only later in life did I have an appreciation of many of our teachers who had done it much tougher than us, having lived through those difficult war years to then altruistically try and infuse us with knowledge. Notwithstanding my nondescript academic performance, which usually featured 'could do better' in term reports way too often, I somehow managed to win an end of year prize in 3T by finishing 3rd in form, by making a decent fist of Geo, Art and TD. I also discovered I was a cross-country runner and made the School 1st XI at football in my final term, sports that I took with me into the Army, and that I continued with for the following forty years! A hip replacement in my fifties ended all that. Looking back now it seemed all too soon to be over. Final Assembly, 'Lord Dismiss Us', Goodbye to all that! Across the years and distances, having lived in a few countries since those days, memories and lasting friendships made (and the thump, thump of those large plates of meat thundering down the corridor meant that The Boss was patrolling again - heads down, he's looking into the class through the window!), still resonate, and I feel privileged to have called CCGS my Alma Mater. Fred Bullock Sept '57 – Dec '62 (Inspired by Tess Taylor!)