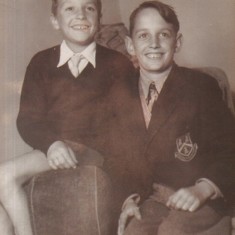 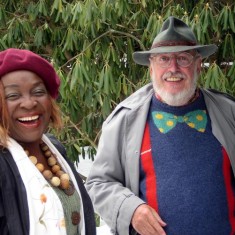 I am on my second marriage, to Nina, who has two children from her first marriage and they have produced three grandchildren. My first wife and I had no children. Some may remember my younger brother Tim, who is retired surveyor and lives in the New Forest with his 2nd wife Helen : they have five children they brought from their first marriages and numerous grandchildren. Cousin Paul Lockyear still lives in Moreton-in-Marsh : his Dad and then he ran London Road Garage for many years – its now houses!

Having been an avid stamp collector all my life, I belong to many local and national societies, several of them specialist, including the Sarawak Specialists Society where I was President 2001-04 and led the only two tours the Society has ever made, both to the Far East. I have been Secretary of the Royal Bank of Scotland Group Philatelic Society since 1996. I am also heavily involved with Freemasonry, being a Member of 14 Lodges and Chapters in numerous Masonic Orders. Running a Cadillac Seville as I have done for ten years, I have also been to two Grand European Rallies in it, in Belgium and Germany, via the Cadillac Owners Club of GB. In (early) retirement since 1995, I have a stamp and postcard business,selling at fairs and on eBay, and have a number of other business interests.

I have attached a photo of Nina and I on our joint 65th birthday world tour, wrapped up against the cold whilst visiting friends in chilly New York. Also a 1954 photo of me (and brother Tim in his short trousers) in my new Chipping Camden Grammar School blazer, which came with my first pair of long trousers – that’s right, you didn’t get long trousers until age 11 or12 in those days!