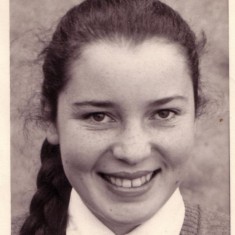 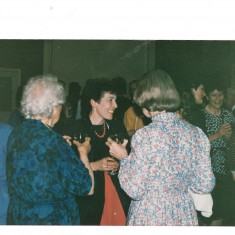 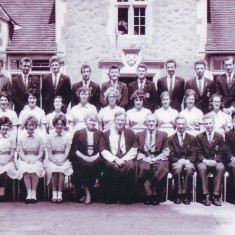 Activities while at school
I played both hockey & tennis for the school, both first & second teams, & liked distance swimming in the cold Broad Campden Baths. I didn't endeavour to do much academic work but enjoyed English, English Lit. & History;  (Miss McMullan was my most inspirational English teacher) Besides having a penchant for daydreaming,  I think my disinterest in academia  was due in part  that throughout my school career I was compared unfavourably with my extremely clever sister, Elizabeth Taylor.  Miss David's constant refrain was,  'O woe is me, you are not like Elizabeth'   (I couldn't even match Elizabeth's skill on the hockey field.)  I was made a prefect in my final year & was useful doing teas for football matches & parents' evenings, besides ushering at school plays. My school friends were Shirley Keitley, Gillian Welch, the late Sue MacRae, the late Judith Allard, Pat Hart, Ann Cutts, June Fowles, Pam Richardson, and Kathleen Ridgers. Shirley & I remain great friends today. Boy/girl relationships were discouraged by the headmaster, though when I was sixteen I went out with a handsome sixth former. Among the boys with whom I did corridor duty, and played tennis with after school were, Sam Garaway, Peter Brain, the late Bron Dudek, the late Graham Bate, Ricky Organ, Dougie Court, Sam Gladwin, Cyril Smith, Trevor Brotherton, Nick Jacques, Chris Jacques, Andrew Chisman, Bruce Page & Fred Bullock. We occasionally played tennis doubles with members of staff including Mr Thompson & Mr. Newton. I once sat next to Nick Jacques who was travelling on the same South Midland coach from London as me. Stopping for a coffee break at Oxford,  I sat down with Nick in the cafe  when I found to my embarrasment that my new false nails had stuck to the inside of my gloves!  (I'd spent part of the Christmas hols with London cousins who were far more trendy that their country cousins.) Besides the nails,   I was wearing an awful black 'Beatles' look alike wig & badly applied black eyeliner. When my mother saw me trudging home through the snow, she thought that I resembled a panda! I loaned Nick ten shillings which he repaid when the new term started, It was on that journey , January 1963, that the coach had to plough a course thro' deep snow & trying to control it,  the driver entreated it to stop doing the twist!  (Chubby Checker's record, 'Let's Twist Again', was all the rage.)  Instead of getting off the coach in Moreton, it made an unscheduled stop for me at the Cross Hands on the A44, above Campden & immediately became stuck in a snow-drift. My sisters who had walked there to meet me & I had to walk helplessly away leaving the hapless vehicle & passengers stranded! (We had tried pushing it !)
Life after school
I trained as a nurse which lead to a career lasting forty-five years, latterly as Practice Sister in Stow on the Wold Surgery for twenty-three years. I married in 1968 (now divorced) & juggled part-time nursing, & doing the accounts for my husband's haulage buisness  with raising three children all of whom attended Campden School. ( I have seven grandchildren. ) I recently returned to live in Chipping Campden & am involved with the History & Family History Societies. Other hobbies are walking & Creative Writing. Last year I wrote & published a book, 'Tess, Growing Up in Post-War Campden.'