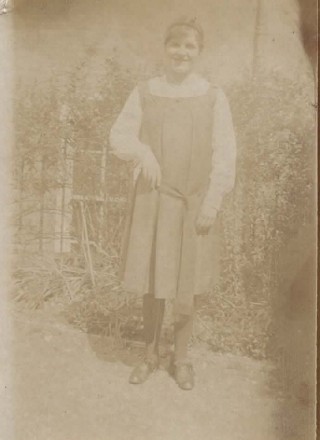 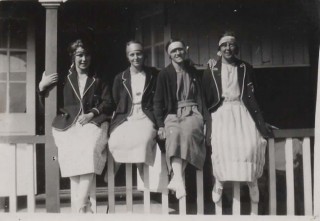 Frances Waring was born in 1900 to William Waring, an agricultural labourer, and his wife Elizabeth. William was an Ebrington man but Elizabeth, 12 years younger, came from Birmingham: she may have had a better education, certainly Frances was a clever girl.

She started at Ebrington School and two books awarded by Rev Guerrier are still in her possessions (in a private collection). In 1913 Frances came top in the scholarship examination for Chipping Campden Grammar School and was awarded a free place.


The uniform still had to be purchased, as the letter from the Headmaster shows: “In reply to your letter the girls wear a white sailor hat with special band – the band will be supplied at the school price 1/5d. The sports subscription for each pupil is 2/- per term. The Games and Drill costume is navy blue serge and white or cream blouse – a pattern of this will be lent at the school. The girls generally make their own from this pattern.” (Frances may be the girl seated on the right in the photo of the hockey team) 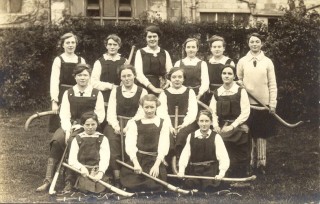 During her time at the school Frances was top of her class, only twice in the termly reports was she second. In 1916 she was awarded a one-year ‘Bursarship’ from Gloucestershire Education Office, covering school fees and books, and a maintenance grant of £12. Her school reports are exceptionally good. In 1917, at Speech Day, “the ‘Best All Round’ prizes for conduct, public spirit , school work, and games, decided by the vote of staff and pupils, were carried off by Ellis and F. Waring.” (Evesham Journal)

A commendation from Mr Cox says: “Her influence in the school has always been for good and she proved in every way a leader in tone and discipline.”

She was accepted for teacher-training, her long-held ambition, in 1917, although concern was expressed by Salisbury Training College that she was under 18 and had no teaching experience. She graduated in 1919 with credit in Advanced Geography and Advanced English and completed a probationary teaching period at Pucklechurch [Elementary] School near Bristol. Thereafter, Frances taught at Holy Trinity Girls’ School and Samuel Southall Secondary Modern School, both in Worcester, with a break during WWII (her war-time role is not known).


Frances never married and retired to Ebrington where she was well-remembered.

Frances was also good at sports and played for her house team, Hicks.