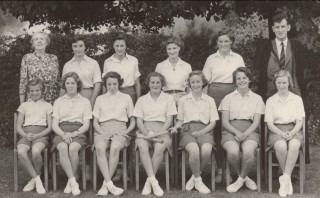 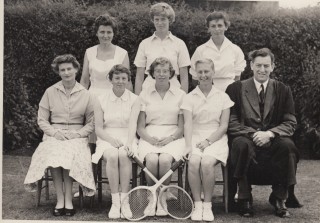 Miss Hill taught PE (mainly hockey and tennis) and Religious Instruction (RI).  She was always extremely neat and tidy and very precise and put one in mind of Miss Myfanwy Price in ‘Under Milk Wood’ – “neat as a jenny wren…”  She was rather dainty and her clothes were always impeccable, if, by the 1960s, a little old-fashioned and probably mostly home-made – and none the worse for that.  One got the impression that she was quite nervous, although she could be very strict – one of the ‘old school’ of teaching.

Religious Instruction basically meant Christianity – I don’t think we did any other religions or comparative religion.

As a Grammar School, the sports for girls were hockey and netball in the Autumn and Winter terms and tennis and rounders in Spring and Summer.  Swimming was also encouraged, at first using Campden Swimming Pool on the road to Broad Campden and, once the school Swimming Pool had been built, then obviously at the school. When the school became comprehensive the sports on offer were expanded and included such things as orienteering.  Miss Hill was Head of Games.  She lived in Peyton Cottage in Leysbourne.

After retirement she set up Campden Bookshop with Geoffrey Powell and also carried out some research into Campden history, the results of which are held in Chipping Campden History Society archives.

Miss Hill took us for English as well being the drama producer. Her nickname was Spitfire and the story was that her fiancé had been a fighter pilot killed in the Battle of Britain and this unrequited love was the reason she never married.

Later in life she ran a book shop in Campden and, on one of my trips back to the UK I called in at closing time. She invited me in for a cup of tea and nearly choked on hers when I told her she had been the object of some of my teenage fantasies.