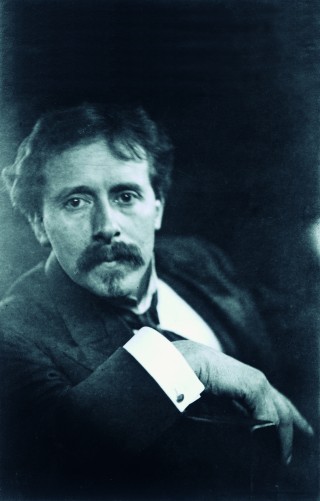 Charles Robert Ashbee was an Architect with a flourishing practice in London and greatly influenced by the writings of Ruskin and William Morris, sharing their views on a better life for the working man.

He was through and through an Arts and Craftsman and a romantic socialist. Driven by these ideals, he founded in 1888 a Guild of Handicrafts in Whitechapel, London. There were a number of such Guilds in London at that time bringing together craftsmen of all skills engaged in hand work. They included cabinet makers, jewellers, enamelers, metalworkers, joiners, printers, designers, silver and goldsmiths.

The fundamental beliefs which inspired these Guilds were driven by:

• there should be a return to handwork

• a man and his family should be well housed

• a man might enrich his life through education and social activities

Ashbee saw that the achievement of these ideals lay in the return to the country and to the simple life.

This led to the remarkable decision to move to Campden in 1902. Ashbee brought about, single handed, the ideology of the underlying Socialist principles of the Arts & Crafts Movement – the first and only man to do this.

At that time Campden was a sleepy agricultural town, gradually invaded by cockney craftsmen, who with their families totalled 150 newcomers to a town with a population of 1500. Initially, there was much antipathy and resentment to the new arrivals – in the local shops bread cost more to the Guild people than to the locals. Lord Gainsborough’s action in giving notice to a number of tenants in anticipation of higher rents from the new arrivals did not help matters. Ashbee himself was regarded by the locals as an eccentric, neither a toff nor a worker.

So often with such men driven by a vision, he was not the most sympathetic or diplomatic man in dealing with those who stood in his way. He quickly fell out with the Vicar, thereafter worshipping at Saintbury. The formation of the School of Arts & Crafts in Elm Tree House was not best received by the Grammar School, as until then they had run the Technical School for twenty years.

With his customary drive, he set about creating workshops in the Old Silk Mill and renovating, restoring and building new properties in Campden to accommodate the craftsmen and their families. Initially, there was some dissatisfaction with the accommodation offered on arrival, and seen as worse than Whitechapel. 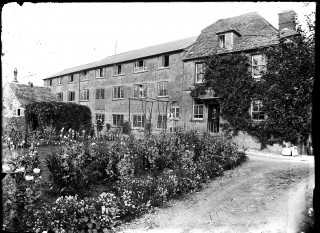 With the move back to London in 1907, it might be seen that the brave and worthy experiment had failed. However, not all the Guildsmen returned, some twelve remained, notably Charles and Janet Ashbee, George Hart, Harold Pyment and Alec Miller who formed a reconstituted Guild.

Campden School of Arts and Crafts

The structure of State-aided education in Britain was transformed by the Education Act of 1902, which transferred responsibility from school boards to the county councils under the Board of Education and made the first substantial provision for secondary and higher education. For Ashbee this meant that the work of the School of Handicraft abandoned for lack of subsidy in 1895, could be revived. There were grants to be had from the Board of Education and Gloucestershire County Council.

In the spring of 1904 Ashbee started to repair and adapt Elm Tree House into a school providing two libraries and classrooms for cookery, 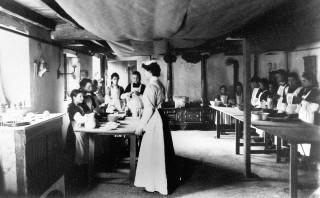 woodwork, metalwork and enamelling on the ground floor of the Malt House at the back. Over them a long room was turned into a gallery and lecture room. He started the school to bring some ‘higher life’ into the occupations of the countryside. Open to all, members included those from the Guild and the locality.

He planned to teach much more than craft classes; vocal and instrumental music were taught by Mr J.B. Matthews, organiser of the Cheltenham Music Festival.

There was land at the back of Elm Tree House where gardening classes could be held, young men and boys growing beans, parsnips, onions and peas each on his little plot. 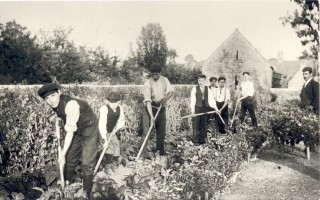 In 1904-5 Janet Ashbee gave a series of lectures on “The Growth and Influence of Music”, during which George Chettle, Janet and Charles Ashbee sang songs and her father played a violin sonata by Attilio Arisoti. At other times Walter Crane spoke on “Design in relation to the Crafts”, Thomas Adams, Secretary of the Garden City Association on “Small Holdings and Life on the Land”.

It was typical of Ashbee that he could bring distinguished lecturers down to Campden to talk to a mixed and country audience and all without a hint of condescension.

In January 1916 the School of Arts and Crafts was closed by the Gloucestershire County Council on grounds of economy.

By the turn of the twentieth century Chipping Campden School was not faring well. From over 60 boys in 1880 it had declined to thirty five in 1907 with only eight boarders.

In 1892 Canon G.D. Bourne, Trustee and Governor succeeded in getting the County Council to provide £700 for the purchase of the Kings Arms Inn, next door to the school. It was converted into a technical school, which considerably extended the curriculum and also proved useful to the Campden School of Arts and Crafts.

The Education Act of 1902 had introduced “scholarships” – free places for boys whose parents could not afford to pay fees and funded by the new Local Education Authorities. Also there was the prospect of admitting girls to the school this was referred to as a “dual school” and by 1910 they had three school mistresses including Mrs Janet Ashbee.

A new Board of Governors was appointed in 1909 with Mr and Mrs Ashbee as members. Ashbee began a campaign to have Mr Osborne, the Headmaster replaced. A notable supporter of Mr Osborne was the representative of Pembroke College, Oxford, Mr Barton, who objected to a long memorandum (See note 1) circulated by Ashbee considering the allegations against Mr Osborne as unproven. The Inspector of Schools asked for his opinion, said that he considered the school in a “state of mediocrity” and had the same opinion of the Headmaster.

Things finally came to a head and on 6th September 1912 a Resolution was passed by six votes to one:

“That six months notice to terminate his engagement as Headmaster be given to Mr F Osborne as required by the terms of the scheme, this step having been found necessary in consequence of the threatened withdrawal of the Grant now received by Gloucestershire County Council on which also depends the Grant received from the Board of Education”.

Ashbee’s correspondence between himself, Pembroke College, Oxford and the County Education Office is at Gloucester Archives and having been digitised is being catalogued on this site.

This is an outline to help others embark on researching the families of the Guildsmen and their children who attended Chipping Campden School.

Court Barn, a museum of Arts & Crafts is a project of the Guild of Handicraft Trust.

Images and narrative by kind permission of the Trustees of the Guild of Handicraft Trust and Paul Hughes,