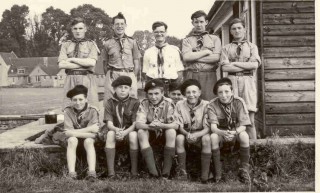 Mr Hickling took us for nature study in the first year and was hopeless at controlling exuberant eleven year olds. Someone from Weston sub Edge had a muzzle loading shotgun and wished to try it out. He wanted the powder and shot from a twelve bore shotgun cartridge for this purpose despite warnings that his gun would not be nitro proofed and it might blow up in his face. I was willing to take the cartridge apart for him and my reward was the percussion cap at the end. Thinking that most of the bang would be from the powder I thought that it would be a laugh to set it off in one of Hickling’s lessons. Holding it between my feet I placed a poker made in metalwork class against it and hit it with a large book. The resulting explosion was deafening and, instead of hiding the evidence, I froze. Mr Hickling came up, shook me, gave me 10,000 lines to be completed before the end of the day but then let me off.

He was the school’s scout master and managed to turn me off scouting by making it boring except for one memorable hiking trip to the Lake District in 1948 or 49. None of us were very nice to Hicky.