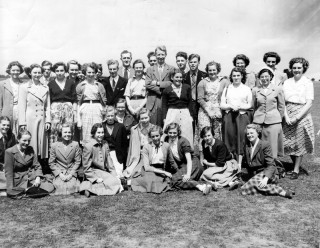 The Morris family lived at the bookshop in the middle of the High Street, & all four of us, my elder sister, Audrey, my brother, Arthur and my youngest sister, Rose went to the Grammar School. It was so convenient for us to walk there – other pupils came from far and wide, by train, bus, bicycle etc. I probably have the record for the longest time in school – from early 1944 to 1953!

My first class when I was about eight was held in the Church Rooms (a prep.school for the GS) and my teacher, Mrs Swift was on the Grammar School staff. On one occasion we were asked why salmon were different from other fish and I cleverly suggested that it was because their bones were soft – being a landlubber where the fish came once a week on a Friday, I think from Broadway in Mrs. Ellis’s van. I had never seen or eaten fresh salmon, only from a tin! Mrs Swift gently put me right.

Next year I went up to the big school. I’ve little recollection of the first few years – I was young and had to stay down a class – I was struggling. But there are some things that I recollect if only dimly. Our cousin, Margie Sinnatt, came to live with us during the war having escaped from Jersey just before the occupation by the Germans. She went to help Mrs. Bright, the Headmaster’s wife, with the boy boarders. The boarders were soon to go – although it was fun in the summer – their dormitory above the Domestic Science room overlooked our garden – pleasantries were exchanged!

The war didn’t have much effect on me except that I do remember a practice we had, putting on our gas masks with Mr Bright in the hall. It was fiddly – the straps got caught in your hair, but for people my age it was fun!

Various groups of soldiers, American, Scottish and English were billeted in Nissen huts in and around Calf Lane, and then later, there were Italian and German prisoners of war. Us children went and inspected them.

Other memories: I loved trips to the theatre at Stratford – the delight of a freezing cold slice of Wall’s icecream between wafers in the intervals. A most exciting trip to Megeve in the Alps with a group led by Mr. Tilbrook. We clambered on the glacier -Mer de Glace which was much reduced in size when I saw it again in 2013.

Our sixth form was minute, three in the upper sixth – David Currill, who went on to be a Headmaster in New Zealand, Monica Spencer, who also went into teaching, and a newish boy, John Lyon, who came from Adlestrop and was always called Ben. I was the only one in the lower sixth – we had our abode in a very small room, the former tuck shop. Our teachers were Mr Tilbrook for Geography, Mr Heatherly for French and Mrs Heatherley and Mr Jones for English. Practically single tuition!

I remember Mr Jones asked me to collect some friends together to visit the children in the Polish Camp at Springhill in the holidays – it was a trek up Conduit Hill by bike or on foot. We managed it about twice – they were so charming and entertained us – we danced to records on the gramophone and had squash and biscuits.

In the second year in the sixth form there were alot more of us. We were asked by Mr Jones in one English lesson to write a sonnet on the subject of the disastrous great 1953 floods in East Anglia. I wrote the worst, my brother, Arthur the best, which was then printed in the Campdonian.

Best memories – the unhurried gentle atmosphere; the funny time when a boy pulled a mouse out of the great bowl of rice pudding and held up by the tail during school lunch; and making friends for life – we are all eighty now – we still communicate at Christmas

Footnote: Cecily gained a BA degree in General Arts from Bristol University & a Diploma in Education. She taught mainly Geography & some English and Maths at Market Drayton Grammar School before leaving to marry her husband, Peter, a Veterinary Surgeon.