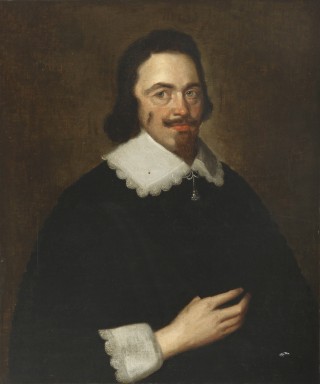 George Townsend was a lawyer of Lincoln’s Inn. He died on or about 14 September 1683, leaving a Will that has had considerable impact on the School and Campden over the centuries.


He “owned much property in Gloucestershire at Mickleton, Longbarrow (Longborough), Wormington, Winchcombe and other places as well as property in other places. His family was large and his many bequests to his many relatives made his will long and complicated. But what concerned the School was the bequest of a farm – Little Aston Farm – ‘to the Masters and Fellows of Pembroke College, Oxford, at the rent of fourscore pounds a year.’” (Robert Cook).

This income was to provide for four scholarships to the college, for boys from four schools – Winchcombe, Northleach, Campden and Cheltenham – in turn, so a Campden boy had the opportunity every four years. Undergraduates in those days would come up to the University perhaps as early as fourteen and stay for up to eight years.

Pembroke Collage formed an educational foundation to administer the scholarships and in subsequent years a college representative was a Campden School Governor. In the 1830s it was reported ‘It appears that in consequence of the election of non-fitting persons from the other towns several exhibitions have fallen to the Gloucester school (Crypt School). Such was the case in 1821 when a youth from Camden (sic) School had been refused by the Master of Pembroke College’ (Report of the Commissioners into Charities in Gloucestershire)

The Will made many provisions for the four towns – for money for the Schoolmaster’s salary, for bread for the poor and provision for apprentices’s indentures, all administered by the Townsend Charity, which had representatives from the four towns. His will also looked after the Trustees: “…(The Trustees shall) ..for the better execution of these my Trusts in them reposed meet yearly in Winchcombe aforesaid on the first Saturday in month May and they shall have there an Eightpenny Ordinary for themselves only and that Five shillings be farther allowed them for Beer after Dinner and other their Joint Expenses there and that every one of them have a pair of gloves given him not exceeding the price of Twelve pence ………” In 1892 the Trustees were still getting their dinners and pairs of gloves (Gloucestershire Archives: D1675 2/2 Trustees Minute Book 1892–1934).

The Campden Trustees were local notables: the Accounts of the Townsend Charity show that on 5 May 1827 Charles D Matthews, a Campden shopkeeper, was nominated as a Trustee in place of William Matthews, and in 1905 Ulric Stanley, farmer and local councillor, was appointed. In 1910 he put forward a case for an increase in the grant to the Grammar School, but it was not seconded, every Trustee doubtless protecting their own interests. George Hart, silversmith, took over in 1919, followed by Harry Hall, bank manager. Subsequently Ian Tilbrook (Assistant Headmaster at the Grammar School) was the Campden Trustee.

Were you a Townsend Scholar?


What was your experience?