Arms and the Man Memories 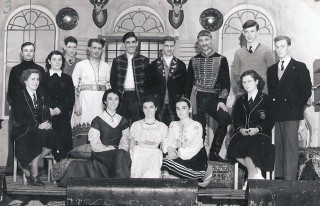 Bill Buckland continues his account of his dramatic endeavours:

At last I broke the sequence of being a losing suitor in the role of Bluntschli, the chocolate cream soldier in Shaw’s Arms and the Man. I can remember little  of the actual performance but do recall getting swords and pistols from Commander Hart. We found that Wilkinson’s swords were sharp enough to shave with, had we been in need of razors, and that indoors a blank fired from a Webley and Scott 45 calibre revolver sounded like a cannon. We reverted to 22 starting pistols and revolvers for our gunfire. These were not immune to mishap and David Stanley produced some bangs after Arthur Morris had issued a cease firing order. Credit to Arthur the extra bangs did not put him off his stride.

The irony of my winning the fair lady at long last was that Raina was played by Shirley Pullen. She and I were not the best of friends, surrounded as she was by a plethora of swains since her real boyfriend and future husband, Rod, had shot off into the RAF. Miss David called for a rehearsal early in the new year when the school was on holiday still. A couple of cars were available for the cast from outlying villages but Paxford was considered to be local. I was ticked off to be told that I would have to accompany Shirley on her walk home. We walked most of the way in complete silence until we were a couple of hundred yards from Paxford when Shirley took to her heels and disappeared into the darkness, for whatever reason, and I was left to make my frozen way back home.