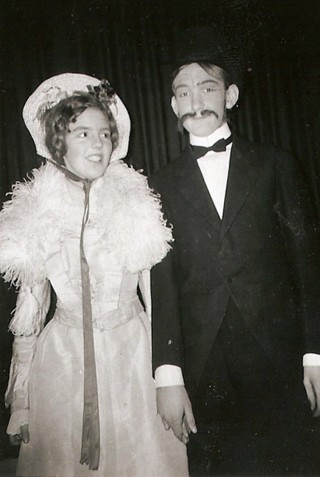 One of the delightful things about school plays is that they are not timid or unambitious. Adult drama groups are too cautious by half, though to be fair they usually have to be, due to lack of resources, both human & material. Schools on the other hand, welcome elaborate productions with large casts because they give as many children as possible the chance to enjoy putting on a play. Box office sucess is not the primary consideration.

Of those schools who regularly entertain us, Chipping Campden Grammar School is one of the most enterprising. With them all things seem possible, dramatically speaking anyway.

Their latest play, ‘I Remember Mama’, by John van Druten had as many hurdles as a cross-country steeplechase. It is a costume play set in San Francisco fifty years ago with half the cast speaking with a Nowegian accent and the other half with an American one, surely the most difficult of all accents to imitate; the production is very complicated with half a dozen changes of scene and a lighting plot almost as intricate as the plot of a detective novel, but the children took all these hurdles – well nearly all – with colours flying.

‘I Remember Mama’ is a story told in flashbacks by Katrin, a sucessful woman writer, recalling her adolescent years with an emigrant Norwegian family in down-town ‘Frisco. It is a large, happy family with Mama at its heart and its inspiration.. After graduating from High School, Katrin tries to become a writer, at first unsucessfully, but with Mama’s resourceful backing she finally makes the grade and the play ends most movingly with Katrin reading her first accepted story to the people it is all about, her Papa, brothers, sisters and wonderful Mama.

The play was a triumph for the producer, Miss David. This time she she not only had to have a talent for direction but also for large scale organisation because there must have been as many people of various ages working behind the scenes as there were players on the stage.

At least one quarter of the play took place in the form of cameos acted in front of the curtains. While the spotlight focused on one side of the stage, where the action was then in progress, silent unseen stage hands were arranging the props for the next cameo on the other side of the stage. It says much for Miss David’s organising ability that when the spotlight swung from one cameo to another, it always found the right child in the right place and not one of the stage hands still adding the finishing touches.

It was these down stage cameos which provided some of the pleasantest moments in the play, I particularly recall the touching conversation between mother and daughter at the soda fountain; the scene at the hotel with a beautiful aspidistra epitomising all Edwardian; and an afternoon in the park with a young, foolishly happy married couple sitting on a bench mooning over their baby in his pram, while a furtive bird whistled in the wings.

The main set, however, was a kitchen cum-living room where Mama presided over her family. This was a charmingly devised interior with homely wallpaper and almost unbearably respected pictures festooning the walls. The costumes were of infinite variety, accurate to period and full of wit and charm; and all the wat through there was a close attention to detail. For example Papa appeared to be reading a genuine copy of the ‘San FranciscoStar’, and the incidental music was mostly by the Norwegian composer, Grieg.

Finally we come to the players. Now, most things concerned with acting come naturally to children, but assuming a foreign accent is not one of them. This is a sophisticated art, acquired by pracrice and observation, yet the children in this play sustained most acceptable and convincing accents.

GIRLS BEST! The cast was headed by Diana Mansbridge as Mama, and Stella Kay as her daughter, Katrin, both of whom gave lovely performances, and were extremely well supported by the others. On the whole the men – sorry, -the boys – were not quite as good as the girls with one glorious exception, Jersy Biegus who was superb as the irascible Uncle Chris.