'The Proposal' by Anton Chekhov & 'The Village Wooing' by George Bernard Shaw. 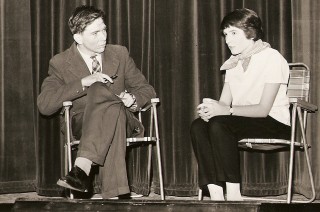 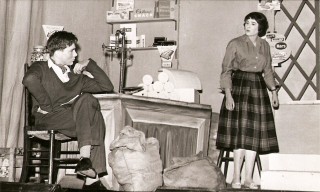 School Plays were not ideally chosen. Two short plays, ‘The Proposal’ and ‘The Village Wooing’ were performed by pupils of Chipping Campden Grammar School before large audiences in the school hall last weekend. After the enchanting series of plays that the school has given us in recent years, it must be confessed that the evening was a disappointment.

The two plays handle the same theme, pre-marital skirmishing in contrasting ways, and present a Russian and Anglo-Irish view of the problem, correctly stated a programme note, and as the basis for an afternoon’s drama discussion the two pieces would afford an interesting comparison. They do not however, add up to a satisfying evening’s entertainment. Both are curtain raisers, intended to be followed by something substantial; we were expecting a banquet but were given two meringues.

Nor were the plays a good choice for schoolchildren since they call for virtuoso performances by experienced players. Their interest lies in not in the story or situation, but in the verbal cut & thrust. Young people do not have the technique for this sort of thing.

Despite this the cast did extremely well though it hurt to see them missing opportunities for comedy that seasoned actors would have relished. The producer, too, failed to avoid the obvious danger of the plays becoming static.

In the Chekov play, the cast were mostly positioned down-stage left with a highly strung suitor edging so far round the proscenial framework that I feared he would fall clean off. The sets, however, were excellent.

The final scene, a reconstruction of a village store won immediate applause from the audience, the first time I remember a set being accorded this honour

It was a bad mistake, though to clear the hall during the interval for refreshments in the school dining hall. To build up an atmosphere and then dissipate it by emptying the hall for half an hour verged on folly. When the audience returned for for the second play, the receptive groundwork prepared by the first play had vanished.

It also seemed unfortunate to have devoted so much care & energy in a drama programme which only five pupils were able to take part.A child’s schooling is short & his acting life during that period even shorter.