A union of brain and muscle 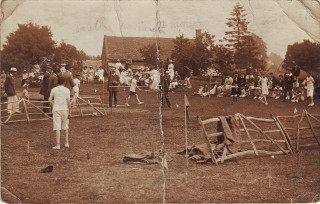 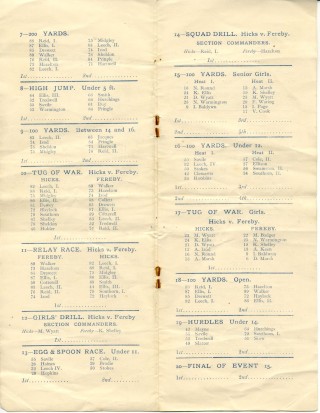 “The School sports field presented an animated picture on Thursday week, when a host of friends assembled to witness the sports and drill competitions. The field was decorated with bunting, and running down the centre was a line of flags of all the Allies……….. The rapidity with which events followed each other gave evidence of splendid organisation ; indeed, one event was scarcely completed before the other was following, and some twenty-six events were carried through in the record time of a couple of hours.”

The newspaper report goes into considerable detail about the events and the ending ceremony: “Mrs Walsh kindly handed the prizes to the successful competitors, and had a gracious word for each. Leech (i) carried off Mrs Harwood’s challenge cup with 13 points out of a possible 15, and had the honour of handing a bouquet in the school colours of blue and gold to Mrs. Walsh…… Major Walsh, expressed on behalf of Mrs. Walsh, sincere thanks for the way in which her efforts had been rewarded. He referred to the energy displayed throughout the sports, and congratulated the school upon the union of brain and muscle, a union by which the success of the pupils was assured. Three hearty cheers were then given for the popular Headmaster, and the spectators dispersed in view of the triumphant house of Hicks carrying shoulder-high the victorious Leech(i).”