A transcript of part of a longer document, which is in itself a transcription of the Case and Proceedings of the 1627 Court Case.

The documents are held in Gloucestershire Archives (Ref: D253) 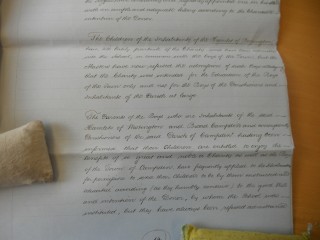 Upon every vacancy of Schoolmaster by death or otherwise the Feoffees have constantly and regularly appointed one in his stead with an ample and adequate Salary according to the Charitable intention of the Donor.

The Children of the Inhabitants of the Hamlet of Berrington have, till lately partook of the Charity, and have been admitted into the School, in common with the boys of the Town, but the Masters have now refused the admission of such Boys alledging [sic] that the Charity was intended for the Education of the Boys of the Town only and not for the Boys of the Parishioners and inhabitants of the Parish at large.

The Parents of the Boys who are Inhabitants of the said Hamlets of Westington and Broad Campden and consequently Parishioners of the said Parish of Campden having been informed that their Children are entitled to enjoy the benefits of so great and noble a Charity as well as the Boys of the Town of Campden, have frequently applied to the Schoolmaster for permission to send their children to be by them instructed and educated according (as they humbly conceive) to the good Will and intention of the Donor, by whom the School was instituted, but they have always been refused admittance … extended for the benefit of the Boys of the Parish at large, and not confined to the Boys of the Town only ? [sic] And

Whether the Feoffees cannot insist upon the Boys of the Parishioners and Inhabitants being admitted into the School, and in case of the Masters refusal to receive them.

Whether the Feoffees cannot remove the Masters or direct their salaries to be suspended?

As the taking of Boarders does not seem warranted by the Founder of the institution, and is most assuredly prejudicial to the Education of the Boys of the Town, and Parish, and as the Schoolmasters assume a right to take as many Boarders as they think fit, can they justify taking an unlimitted [sic] number or indeed any number without the consent and approbation of the Feoffees or the greater number of them ? 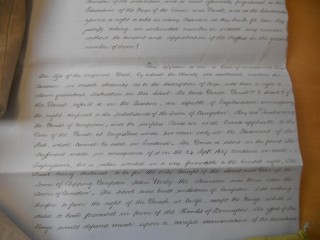 This appears to me a Case of considerable Doubt.  The Loss of the original Deed by which the Charity was established, involves the Question in much obscurity as to the description of Boys, who have a right to claim gratuitous Instruction in this School.  The Words Parish Parishioners & Inhabitants of the Parish refer’d to in the Question, are capable of Explanation even supposing the right confined to the Inhabitants of the Town of Campden.  They are Parishioners of the Parish of Campden, and the surplus Rents are at all Events applicable to the Poor of the Parish at large.  These words two occur only in the Statement of the Bill, which cannot be used in Evidence.  The Decree is silent on the point The Feoffment made in consequence of it on the 24th Sept. 1627 contains no such Expressions, but is rather worded in a way favourable to the limited right.  The Trust being declared to be for the only benefit of the School and Poor of the Town of Chipping Campden.  John Varby [alias Fereby] the Founder was born near the Town of Camden – The School was built in the town of Campden.  I see nothing therefore to favour the right of the Parish at large, except the Usage which is stated to have prevailed in favour of the Hamlet of Berrington.  The effect of this Usage would depend much upon a careful examination of the duration of it, and the Circumstances attending it.  I doubt however whether it will be deemed of sufficient Weight to establish the right of the Parish at large and the Question appears to me too doubtful to venture to advise incurring the risque [sic] of a tedious & expensive Litigation on the subject or to expel or remove the Master for his Opinion in favour of the limited right. 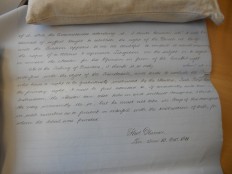 As to the Taking of Boarders, I think it is only    …    when it interferes with the object of the Foundation, and tends to exclude the Boys who have a right to be gratuitously instructed by the Masters.  Such Boys have the primary right, & must be first attended to.  If consistently with their Instruction, the Master can also take in and instruct Foreigners, I think He may innocently do so, but he must not take in Boys of this description in such numbers as to prevent or interfere with the instruction of these for whom the School was founded.