The first sporting occasion was the school cross country run which took us to Mickleton Hills Farm, then along to Pauls Pike and down the Aston Road back to school. In effect it was more of a road race than cross country but I was determined to do well and had run the course a couple of times accompanied by my sister. At the start of the race the admired runners seemed to be those from Blockley and Moreton which narked Tony Hedges and I so much that we came down Aston Road with no one else in sight. I lost my shoe at one point and Tony waited for me to pick it up. However, when he started to run out of puff just before the finish he insisted that I should run on. So I managed to win my first cross country but Tony and I should have gone up the school drive together in joint first place.

The next year, having moved up to the intermediates, I managed a creditable fourth or fifth place and I seem to remember that one of the Keen twins was ahead of me. The year after when I might have been expected to do well I footled around with some of my friends and came in at the back of the pack. This infuriated Mr Tilbrook who made me run the whole course again and checked to see that I did.

There is a gap in my memory until my first year in the sixth form during which period I might have done well or ill but when I was seventeen the course was changed and we left the school, crossed the Coneygree, went round in a big loop before returning up the Coneygree and back to the school. Not having trained I went off at a fair pace and was in the lead for a fair while until we came to an uphill wet ploughed field. I went from feeling good and in front to feeling dead and lying third. I managed to hang on to this position and made it up the drive and give Mr Fowells my name before rushing off to lose the contents of my stomach. 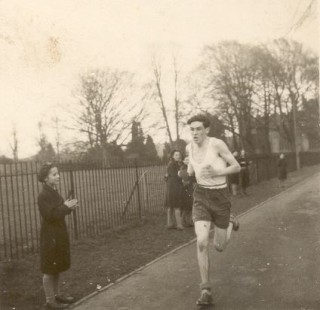 The next year I was determined to do better and I managed to do a little training and left the field behind. As I crossed the wall at the top of the Coneygree Ben Benfield, the school groundsman, pointed out that no one else had even reached that field and I went on to win in record time. As in the first year I managed to lose one of my shoes and there is a photo of me running up the school drive with it in my hand watched by an enthusiastic supporter. I was too one paced to be much good at the shorter distances where the best I could manage was second place. In my first year Mayo and I represented the school in a quarter mile race at some inter schools meet but that was the sole episode of that nature I can recall.