County to be asked for more information 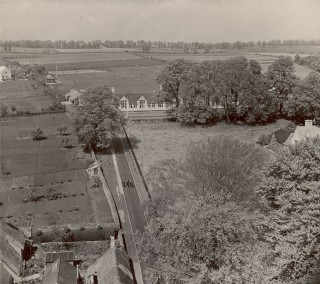 A complaint was made to Chipping Campden Parish Council on Monday that local residents were not being kept informed by the County Council about several big schemes, including the building of a new school, which would transform the life of the town.

“I understand that the plans for the new grammar school have been finally approved,” said Mr. A.F. Primrose. “the contract has been signed and work may begin any day now.  When the school is opened, the number of pupils is expected to be 800, compared with 320 at present.  The teaching staff will be increased from 20 to about 40 and there will be a large increase in non-teaching staff, such as cleaners, laboratory assistants and groundsmen.

“I understand it is proposed to build 15 staff houses in the school grounds, but in spite of this, the present housing shortage in Campden is going to become very much more serious in the next few years.”

All this was of vital interest to the Parish Council and the people of Campden, said Mr Primrose.  It was going to increase business in local shops, and parking and traffic problems were going to become much more serious.  New water mains would have to be installed, as the present supply was inadequate, and there was going to be a big problem over sewage works.

“My complaint is that the Parish Council is given very little information about all these matters,” he said.  “and sometimes we hear about them only after the contracts have been signed.  May we ask the County Council and the governors of the Grammar School to keep the council and the people of Campden informed, as far as possible, as to what is going on.  The people of Campden take a keen interest in the grammar school.”

Mr Primrose added, “We know the County Council has taken over George Lane and Calf Lane, and is going to widen and improve them.  We hear that sites for a health centre and for the top school have been decided on, adjoining the playing field.  There are rumours that the old Swan building in High Street may be sold, and people are beginning to wonder what is going to happen to the youth club and arts and crafts building.

“These are only some of the changes which people are rather concerned about.  Might we ask that we should be kept informed as to what is going on?”

The council supported Mr Primrose’s point of view and asked the clerk (Mr T Winward) to write to the County Council saying local residents were keenly interested in the new school and other projects and wished to be kept informed about them.