John Fereby & his wife Marjerie were founders of the Campden School, most likely date 1440, the date of his will, in which he left financial instructions to ‘fynde a preste for ever to kepe a ffreeschole to have for hys salary by year VIII Li (£8)’. He had worked for King Henry VI who was founding Eton at this time and it maybe this gave him the idea too.

In 1547 it was recorded that there normally 60 to 80 scholars attended the school. Latin would have been an important part of the curriculum, along with rhetoric, logic, arithmetic, geometry, astronomy and music.

In his will of 1688 George Townsend, a lawyer of Lincoln’s Inn, provided for Scholarships to Pembroke College, Oxford for scholars from four Gloucestershire schools – Gloucester, Cheltenham, Northleach and Campden. The scholarships were awarded annually to each school in turn.

In the 1620’s, there was a major legal case by Sir Baptist Hicks and others against the Feoffees of the School and it may be that the school in the High Street was built as the ‘new start’ of the school. Robert Cook, former Clerk to the Governors, has written: ‘Having won their case in the High Court, Sir Baptist and the new Feoffees set about putting the school on a proper basis for the future. One of the first results was that a new school was built in the High Street. (No trace of the original school has been found. If it followed the usual custom, it would have been located near -possibly even in – the parish church).’1 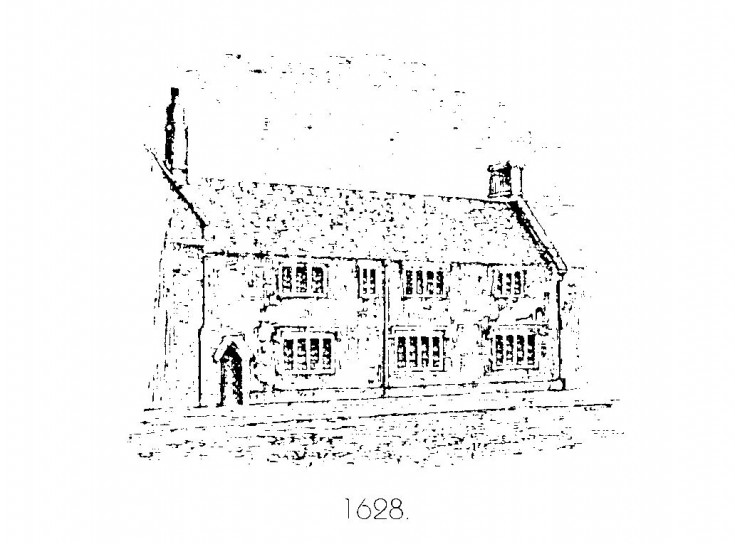 Sketch showing how the school may have looked before 1862

Robert Cook also writes about the enlargement of the building in the 1860s:

‘There were complaints about the poor accommodation for the boarders, which is not surprising for the school was still the small two-story building of 1630. This being the case, the Trustees decided to do something about it.

In 1858 a public appeal for funds was made and raised £560. This allowed them to buy the two houses and garden next to the school, but considerably more money was needed to carry out the rest of their plans. These entailed restoring and improving the schoolroom and building a house for the headmaster, with dormitories for the boarders. So a further appeal was launched in December 1862, which raised some £1800; with this the buildings in the High Street known as the Old Grammar School and the Headmaster’s house were built. The Trustees contributed very generously, five of them giving nearly a third of the total.’ 2 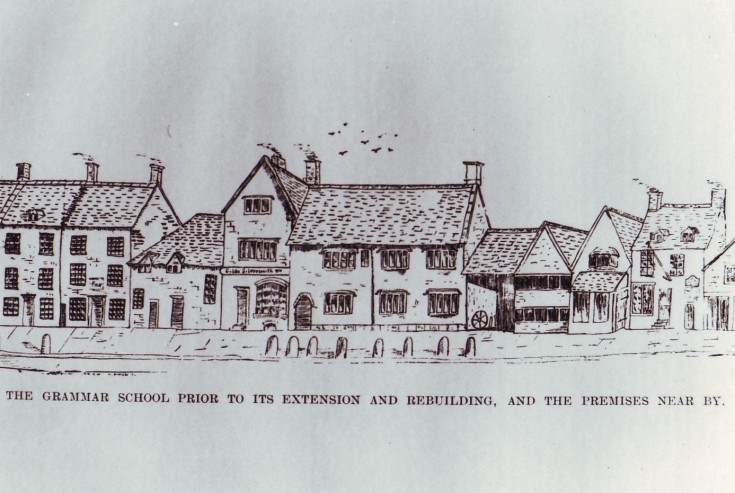 William Rimell was a pupil at the Grammar School in the 1860s and was later the Clerk to the Governors of the School – he described the alterations to the school building: ‘The School buildings were widely different in those early days, for the present entrance led only to the lane beyond, or else to the hall (on the right) of which, owing to its former very low structure, the ceiling has been raised. The small windows above the stone-mullion windows were inserted during the alteration and hence show the exact amount of elevation. The Head Master lived either above or else in a very small house at the back of the hall. I had not been in school long before what is today the left half of the school was erected. During the building, the school migrated en bloc into a chapel at Westington, which today has disappeared. With wonder we beheld a draper’s shop and a basket maker’s establishment (owned by Mr. Ellis) vanish and the new buildings arise.

The whole school and the Governors (including probably Dean Payne Smith) watched Lord Redesdale lay the foundation stone, which is on the extreme left, and which hides what I thought to be a sovereign. Mr. Stephen Silvester presented the bell which was rung for school hours. It always rang with a very imperative, very tyranical twang.

The old regime was now somewhat altered, for previously the head Master held one form at the desk-end of the hall, whilst his only helper, the second master, held his at the other. We sat in extremely old, very long, solid oak benches, which manfully the marks of battle gained since 1487.’3 William Rimell probably took the (incorrect) date of the founding of the school from the inscription over the front door to the building.

There seems to be some variance in accounts of the foundation ceremony for the new school extension: according to John Horne the foundation stone for the new house took place on Wednesday 27th May 1863, with Canon Kennaway presiding. His wife spread mortar with a new trowel ‘admirably suited to the hand of a lady mason’ and gave the stone “3 hearty double handed Cotswold thumps with a mallet provided.”4 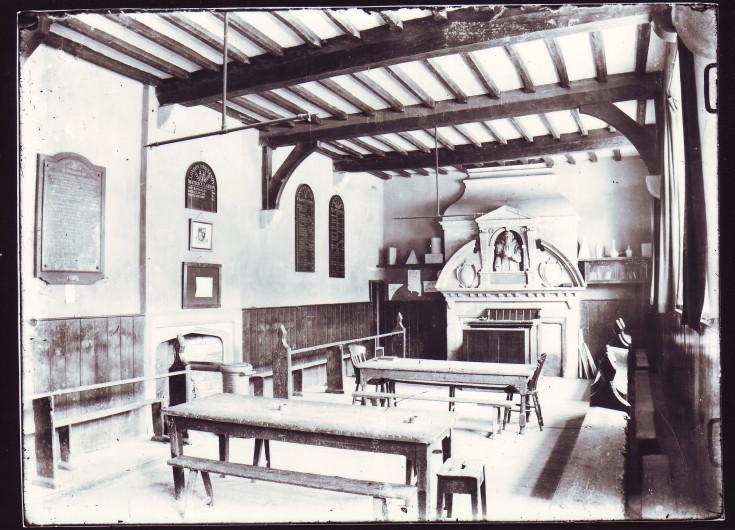 More details come from John Horne – Messrs J.F.Hiron, among others (Harrowby, Redsdale, Northwick, Rushout, Campden, Kennaway) in 1858 resolved to improve affairs at School, to restore schoolroom, create larger residence and dormitories. In Dec 1862 a 2nd appeal was launched, plus £150 from Gainsborough, £100 from Harrowby and Redsdale each, £65 from vicar, and helped the total reach c. £1700. The old school room was retained, walls carried up, ancient ceiling with oak beams raised and windows heightened, plus extra classroom on east side and spacious dormitory over the school. With gables, dormer windows, the bell turret, excellent masonry in the style of ancient domestic architecture, imposing elevation.

Mr Emmanuel Tomes of Campden completed the rebuilding and restoration from designs and under the superintendence of Mr Charles A. Buckler of Oxford.

Harry Warmington also wrote his memories of the school:

‘During 1906-7 the main hall only was used as a classroom, usually with two classes in it. The room overlooking the playground was the boarders’ hall and the small room adjoining was the Staff room. The remaining Classes were held in what is now called “The King’s Arms Pantry”, the front room being a classroom, two upper back rooms being for carpentry and chemistry, and the bottom floor the girls’ cookery room. These premises were later vacated. The chemistry lab was transferred to the old boarders’ hall and later to a back room in the Headmaster’s House. A carpentry shop was built at the bottom of the playground, and a front room in the H.M.’s house became a Classroom. This was greatly appreciated by the pupils, not only for its extra comfort, but also for the occasional entertainment it provided. If the Class was doing a written paper, Mr O. (Osborne) would stand, hands behind his back, gazing out of the window and giving a running commentary on passers-by.’5 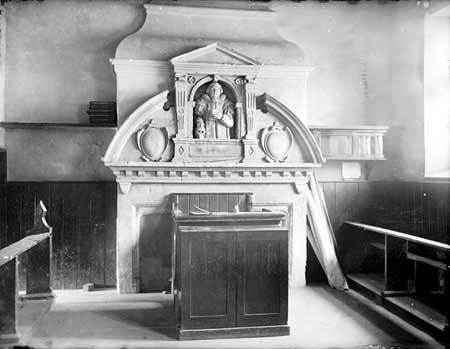 The inscription over the front door reads:

‘Scholae grammatica 1487 J.F.’, carved in the stone by J.D.Thos. Niblett Esq. JP while he resided at Campden.

We know of nothing significant relating to the incorrect carved date 1487 . 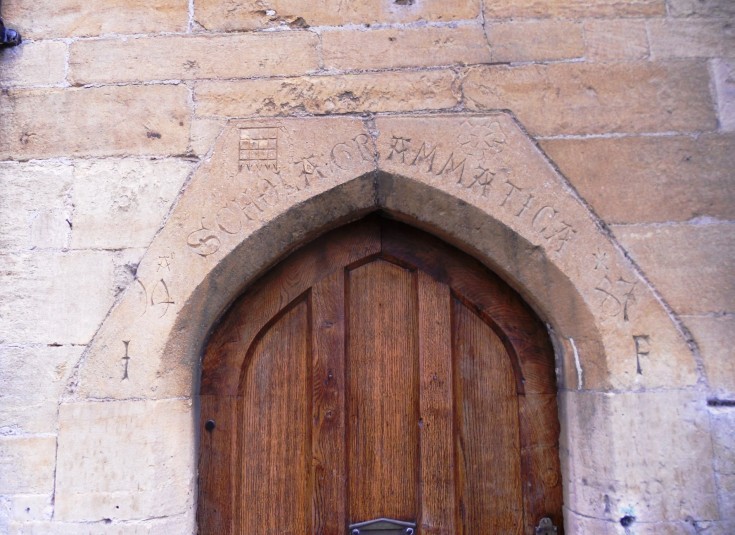 The four symbols need more research: perhaps they are symbols from the various people or facts mentioned above or something relating to learning.