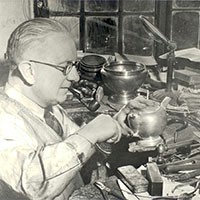 Harry Warmington was a silversmith who worked at the Campden School of Arts and Crafts and at Hart Silversmiths.

In 1906 the Gloucestershire Education Committee awarded four free scholarships to the Chipping Campden Grammar School, to be competed for by pupils of the Elementary Schools in the district.  The entrance examination, written and oral, took place one Saturday morning at the Grammar School, attended by about sixteen candidates.  The four successful candidates were all from the Campden C. of E. schools.  Three were girls and one boy.  This result reflected much credit to our head teachers, Mr & Mrs Newey, from whom we received a sound Elementary education.

So we duly presented ourselves at the commencement of the September Term 1906. Until that year there had been only four girls at the School.  One, Mabel Osborne, daughter of the Headmaster, another Dorothy Carrington, the Vicar’s granddaughter, also Ada Starkiss and Violet Parsons, daughters respectively of two local tradesmen.   There then came about another twenty girls, which, with the boys, brought the total pupils to about fifty.

Staff at the School

At this time the Staff consisted of the Headmaster, Mr F. B. Osborne, one male assistant, Mr Gray and one French lady Miss Hamar.  The Head taught all the Latin to those taking this (voluntary) subject.  Mr Gray was responsible for Science, Chemistry & Sport.  Miss Hamar taught all the French.  The Head also took the upper forms in English & Maths., all other subjects being shared between them.  In 1909 an additional member, Mr Jones, joined the Staff.  The following year Mr Gray left Campden & was replaced by Mr Price (?).  Miss Hamar too retired and in her place came Miss Duncan, a Scottish lady.

From the start I was chiefly interested in Mathematics, English and drawing (especially geometric drawing).  For two years I was also interested in French.  Then came an incident which, years afterwards, I was to regret.  At this time we had a glut of Inspectors in the School, to make a report on the affairs.  One of them was present at a French lesson, during which Miss Duncan had borrowed my English-French dictionary.  On my going to retrieve it at the end of the Class, the Inspector asked “How is this boy progressing?” and Miss Duncan said “He is lazy and could do much better.”  I was absolutely furious and said “That’s not true.  I am very interested in French, and spend more than twice as much time on French homework than any other subject.  At least I have done, but from now onwards shall only do the least possible.”  The Inspector tried to take the sting out of it, but the damage was done, and, with one exception, I never got any marks at all for French.  The exception was when we had for homework a piece to translate into French.  When I got home and looked at it it seemed familiar and I remembered having done the same piece the previous year.  So I looked up my old book and copied it (with corrections) and obtained fully marks for it.  Miss Duncan was livid.  “That proves what I said.  You can do it if you try.”

Another of my interests was lettering, and that nearly got me into trouble.  One night for homework we had to draw a map of Scotland, and fill in the place names.  This I did in a few minutes, when my school pal arrived saying he could not draw the map.  So I told him to hand over his book and I soon finished it for him.  When Mr Osborne examined our homework, he glanced at each one and passed on.  When he came to my pal he looked at his, picked it up and looked again, then marched straight across to me.  “You did this,” he said.  Of course I had to admit it.  After a pause he said “Well, I suppose there is some virtue in helping a friend, but you might at least have left him to fill in the names.  Your printing gave you away.”

One afternoon a half-day was declared for football.  Two teams were chosen, and the rest of the school was supposed to watch.  My pal & I decided a walk round the fields would be more enjoyable, so this we did.  Of course our absence was noted, with the result that we were both ordered to write 10 pages of history, commencing that dinner hour.  That afternoon for Maths we were set to do as many sums as we could from a given paper.  As I have said I liked maths, and when the results were checked it was found that I had done more than double anyone else.  Mr Osborne adjusted his pince-nez and said, “You appear to have been very industrious this afternoon.  How much of that imposition have you done?”  I told him about 2 ½ pages so he said, “In the circumstances I’ll let you off the rest.” 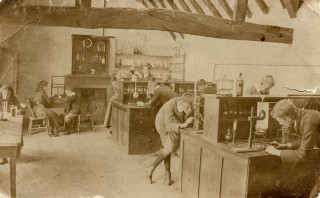 During 1906-7 the main hall only was used as a classroom, usually with two classes in it.  The room overlooking the playground was the boarders’ hall and the small room adjoining was the Staff room.  The remaining Classes were held in what is now called The King’s Arms Pantry, the front room being a classroom, two upper back rooms being for carpentry and chemistry, and the bottom floor the girls’ cookery room.  …  The chemistry lab was transferred to the old boarders’ hall and later to a back room in the Headmaster’s House.  A carpentry shop was built at the bottom of the playground, and a front room in the H.M.’s house became a Classroom.  This was greatly appreciated by the pupils, not only for its extra comfort, but also for the occasional entertainment it provided.

If the Class was doing a written paper, Mr O. would stand, hands behind his back, gazing out of the window and giving a running commentary on passers-by.  This depended on whether he liked or disliked the object of his remarks.  The latter came in for some heavy sarcasm, two of which I well remember  “There goes that fellow Ashby [sic].  A trap and snare for the unwary.”   A prophetic remark it turned out to be, for it was mainly through Mr Ashby’s [sic] persistence that the Head lost his employment.  Another bête noir was a Mr Lucas, a solicitor’s clerk, who was also rent collector for many property owners.  His character was summed up, “There goes that fellow Lucas.  He walks about as stiff and stark as a walking-cane and thinks himself no end of a Duke.  He peeps and prys into everybody’s business.  Peeping Tom they call him.  A just, right and proper name for the fellow.”  These remarks were always delivered in slow, sonorous tones which made them easier to remember.  Another person for whom he had little respect was Mr Dewey, the Head of the C. of E. Boys’ School.  In consequence Percy Dewey, his son, came in for many a sly dig.  One morning on inspecting the boy’s homework, he said “Dewey.  It’s your father’s work.”  Percy admitted that his father had helped and this brought “I knew it!  I could tell by the round-about way in which he arrived at his conclusion.”

Another amusing episode.  At the mid-morning break Mr Osborne would sometimes walk to the Noel Arms.  The landlord there, Mr Tanner, was given to speaking “Malapropisms” all of which Mr O. retold in Class.  The ultimate was reached when one morning Mr O. said “Mr Tanner has excelled himself.  This morning at 4 a.m. he dashed across the Square to the Doctor’s house (now the King’s Arms Hotel), roused the Dr and said “Come quickly.  My wife is rapidly approaching her encroachment.”

I personally found Mr Osborne a good teacher.  He was a strict disciplinarian, who seldom used the cane.  When he did it was in the privacy of his study and was severe.  One boy who was sometimes ordered to go to the study was told “Go and borrow your father’s cane.  His is better than mine.” Knowing full well that the boy would be thrashed as well by his father for being in disgrace.  This we all felt was rather mean.

One day in each week we had physical drill in the playground (weather permitting).  The Instructor was Col Sgt Gray, of the 1st Batt Gloucestershire Regt., who was posted to Campden as drill-instructor to the local company of Territorials.  We started in two ranks and double-marched round the playground.  These two ranks were led by Don and Gordon Russell, both, even then, being over 6 feet tall.  They were followed by boys ranging from 5 feet to 3 feet and I could always imagine them as two snakes with large heads wriggling round the playground.  Then we would do arm and leg exercises and finish with press-ups.  These were not very comfortable owing to the sandy nature of the playground.  One day during these press-ups a boy collapsed.  One going to find the reason, he found both of the boy’s hands were bleeding from a recent caning.  Drawing himself up to his full 6’4” the instructor said in his best parade-ground voice, “You go back into school, carefully wash your hands, then find someone to apply a dressing.  After that go and sit quietly for the rest of the day, and if anyone queries it, tell them I ordered it.  And you can tell your Headmaster he is very lucky that you are not my son.”

One amusing incident I recall.  One problem in maths we were set for homework seemed insoluble.  In the end I guessed the answer and proved it right.  Then I had to find some method to produce this answer.  In Class Mr O said “I don’t suppose anyone has done this sum.” And was surprised when I said I had.  He took my book and looked at it a long time, then said “I don’t quite see why you adopted these figures but you’ve got the answer right and that’s what really matters.”  He then showed us on the blackboard how he thought it should have been done.

During the summer holidays in 1909 I was permitted to attend a metalwork class at the School of Arts and Crafts at Elm Tree House, where they ran a Summer School for teachers on holiday.  Attending that and other classes were a number of teachers, who all showed an interest in my school career, and without exception, all advised me to stay on at school and train to be a teacher.  This advice I got too from several Campden people.  However, by the summer of 1910 I decided I wanted to get out and start working and making things, and eventually persuaded my father to let me leave at the end of that term.  Mr Osborne was disgusted but had to agree.  I was replaced by my sister, who was wise enough to listen to advice, and eventually became a successful teacher.

These are some of my recollections of my days at the Grammar School.  Should I have been happier as a teacher?  I doubt it.  Financially better off I’ll admit, but I’ve had a happy life in making beautiful things and, I hope, in helping others to do the same.  I have had several “spasms” of teaching, but always unfortunately part-time & not qualifying for pension.  But I have enjoyed these interludes too, and may be, sometime, I’ll write about those too.