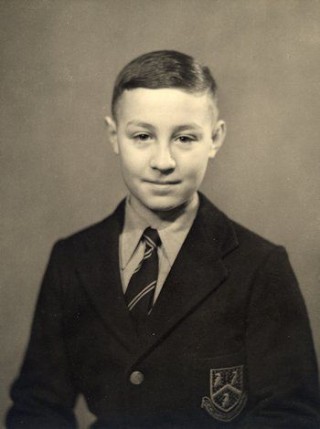 At ten years of age I was bundled off to Chipping Campden Grammar School in the Cotswolds. The original Grammar School, going back to 1440, situated in the High Street, was now the boarding house for the boys with the Headmaster, Wilfred Bright, living next door. The girls boarded in Seymour House on the opposite side of the High Street.

It was winter 1940 when my parents took me for the start of this new life in the country. Snow was knee deep when they pushed open the five hundred year old main door – inside! That, in addition to a howling gale blowing through the building, really brought home to rigours of boarding. I recall my mother saying, “We can’t leave Bill here”. All my father said was, “it will do him good”….I stayed, needless to say, until 1943 when I moved on to Loughborough Junior College.

Boarding at Chipping Campden was a great experience and a lot of fun. Even my parents thought it was a good place to have sent me once they got to know the owner of the Noel Arms Hotel and ‘Old Man’ Spittle and his Wife who owned the main antique shop. The Spittle’s had Rosary Cottage right in the centre of the village and being complete with stable doors it was so much easier to be able to exchange cabbage for a brace of pheasants etc – country bartering at its best.

My parents on the infrequent visits at the weekend would stay at the Noel Arms and such was the relationship with the owner, my father and he used to play bowls on the hotels green, for the ownership of the pub for the weekend. My father was a pretty good bowler and seemed to come off best. On winning, he would line up all the staff and inspect them for clean nails, combed hair, clean and tidy uniforms etc….all in good spirits.

On the odd occasion that my parents took me out we would go to the George Hotel at Shipston on Stour where they served dripping on toast in front of a roaring fire in the lounge…what heaven! Mr. Last owned the hotel; his son Nigel was at my school as a day boy. Many years later, Nigel went into the army catering corps and on release, started up a restaurant called the Howard Arms at Ilmington, near Stratford upon Avon, which became world famous for food.

Chipping Campden was also the first place I was severely caned by the Headmaster, who lived next door to the boarding house. In my second year I was moved from the house into the building off the garden. Some ten boys shared this dormitory and with the garden being so handy, with a prolific apple orchard, night-time sorties were undertaken to get some apples. Three of us were caught and as we were getting washed the Head appeared……we only had our pyjama bottoms on. He laid into us with a very whippy cane…we had welts across our backsides for days after. We also went off apples for some reason or another!!

Initiation to this dormitory was for all the boys to leap on to your bed whilst you were in it…unfortunately the bed shattered beneath me and the weight of all the others. The Head was not amused, but knew of the so-called “tradition of initiation”. No punishment was meted out. A silly thing we used to do whilst living in this dorm was to go barefooted down the wooden staircase and jump on to the core matting from the third or fourth step. Believe it or not, we thought that this would harden our feet.

It was in this dormitory that I had my very first feeling of fear (or trepidation, if I had known what that word meant at my age) was when I had been moved out of the main boarding house into the annexe which was away from the main building and in the grounds. I knew that there was a form of “welcome” for all newcomers to this isolated area which had little supervision. We were grown up of course and knew how to behave! The form of “welcome” was not a laid down but was dreamed up by the existing residents for each new dormee.

My first night went fine…..no problem. This made the waiting somewhat fraught with trepidation or fear of what might happen on the second night. The dorm must have been full of psycho’s since they knew how to build up the forthcoming initiation. At last, it happened at about 3am……all nine of them jumped on my bed all at once with me in it and asleep at the time. The bed broke in two fortunately, since it sort of acted as a cushion and took some of the gross weight off me. I only suffered a couple of bruises and a withering period with the Headmaster trying to explain why my bed had to be replaced. There was no question of “grassing up” those responsible and thus my explanation was somewhat implausible and unacceptable…….bend over Stephenson!!!! This was the first of two introductions to “corporal punishment”.There were of course other silly pranks such as “Apple Pie beds”…..disposing of the top sheet and folding the bottom sheet up to look normal. When you got into bed there was of course only half the length of bed available.