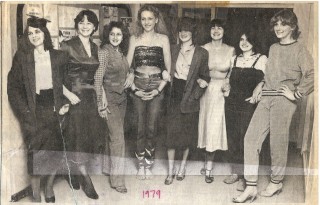 The Evesham Journal reported, in 1979:

The clothes were provided by Flair Boutique, of Oxford Street, Moreton-in-Marsh, and were a mix of teenage fashions, including dance gear and jogging suits. This the second time recently that the boutique has helped a school raise funds. A similar fashion show was put on at Shipston-on-Stour High School.

Do you remember this event?