Memories of my school cricket career 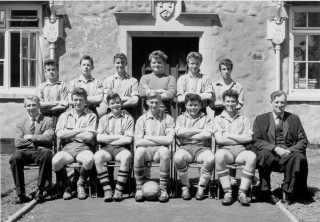 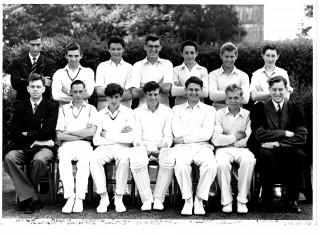 Memories of my school cricket career

If my memory serves me correctly the year would be 1961 and I was a fourth year pupil at the then Chipping Campden Grammar School. I had been selected to play for what I believe was an under 15 team (may have been a second eleven) to travel to Burford Grammar School, along with the first eleven team, to play two cricket matches against pupils of that school. Travelling by coach we duly arrived in the early afternoon to play these matches only to be told that players of Burford Grammar School were only expecting to field one team i.e. their first eleven against our first eleven and had arranged for eleven players only.

The teaching staff at Burford told us not to worry and they would try and scrape together a team to give us a game of sorts but it would probably be not very good. Our hopes were raised as we thought maybe we would have a comfortable win !! My memory does not recall who won the toss but I do remember the Burford “scratch” eleven batting first. Playing on a pitch with short boundaries and presumably on a wicket that had not previously been prepared, runs began to flow. One batsman arrived at the crease with his grey flannel trousers and one pad only (on his left leg – he was a right hander). He proceed to hit runs all around the field and was eventually out for about 70 runs and the Burford innings closed with a total of approx. 170. An excellent total for a “scratch” team.

After a short refreshment break it was our turn to bat. We were full of confidence having seen the ease in which runs had flowed on this pitch with its very short boundaries. Alas, our confidence was soon shattered when, after a very short while, we were bowled out for a grand total in the low twenties (a defeat by about 150 runs). If my memory again serves me correctly, one of their bowlers took eight wickets before he was removed from the attack to give others bowlers a chance. I was one of the two wickets that he did not take and I finished with a total of five runs being the second highest scorer in our meagre total. Four of these runs came from a straight drive over the top of the slips (cricket followers will understand this stroke and would probably describe it as a thick edge from a hoick outside the off stump) . I cannot recall the outcome of the first eleven game but do remember that we had time to explore the delights of Burford before returning to Campden.

The following Monday at school, I was asked by Mr Moore (the games master at the time) “who got all of the runs on Saturday ?” Was this a facetious question or did he not really know. Anyhow, I volunteered the answer that I was second highest scorer with five runs and was then told on the next day (Tuesday) that I had been selected for a first eleven game to be played away against Chipping Norton Grammar School on the Wednesday afternoon. I was very surprised that my exploits with the bat had warranted this selection but on seeing the team sheet soon realised why. It was the middle of exam time and most of the regular first eleven players were sitting GCE O and A level papers that afternoon.

We travelled to Chipping Norton on the Wednesday afternoon and with nervous anticipation I looked forward to finding out my role in the team. Would I be opening the batting? Would I open the bowling ? Or would I perhaps be wicket keeper ?. No, none of these roles for me, I was on the team sheet as the number eleven batsman and despatched to field on the boundary during the opposition’s innings. The opposition batted first and my memory of fielding was not good. A ball was hit straight towards me along the ground, my time to shine, collect the ball and throw to the wicket keeper. Alas, no, the ball bobbled in front of me and went through my hands and over the boundary for four runs. Whatever happened to getting your body behind the ball, not likely that ball is hard. What could I do other than retrieve the ball, raise one hand and say “sorry skip”. Our turn to bat next, the run chase was achieved with one wicket in hand. I did not get to bat, or bowl or keep wicket and my fielding left a lot to be desired.

I believe it was my availability rather than my ability that got me selected !! These two cricket matches played over a period of five days must have left me with a mental scar, as to this day I have never taken part in another cricket match other than house matches for Fereby during that current and the following season. I wish I could remember the other player’s names who took part in these two matches but unfortunately the only name that I can recall is Michael “Sammy” Garaway who I believe was probably the first team captain at the time.