Travelling to school in the 1920s 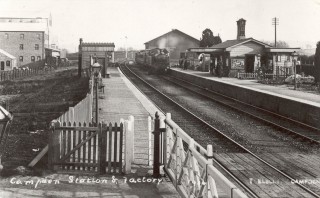 I first went to Chipping Campden Grammar School by railway train. A train that collected pupils from Kingham, Adlestrop and Moreton in Marsh. The train times and the long walk from the station to school in the High Street meant that we arrived when the first lesson was almost over. If that were an unpopular subject we would endeavor to be as late as possible. The route was direct to the church, past the almshouses and the wagon wash pond, to enter the school at the rear via Calf Lane. Many were the pranks that were played during that walk. One silly one was to ensure that no boy could have a new looking school satchel. It soon bore what we called honorable scars after it had been kicked a little, while still on the boy’s shoulder or back, and of course causing not a few tears from the owner. There was another trick that was played mostly on friends. To play it on others could cause a fight. John Pauling, Bill Eyland and myself were good friends and always walked together. Bill and I would manoeuvre our respective positions so as to get John on the hedge side of the path. As we came to a ditch filled with stinging nettles, one would shoulder but John or the middle one who would cannon into John. The result was always the same John would end up in the ditch. Remember that we wore short trousers so that hands, face and bare knees came into contact with those nettles. John always fell for that trick and of course we were always the best of friends. 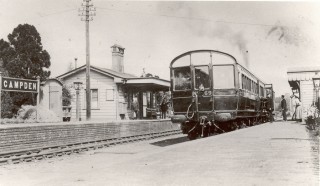 1926 produced a labour strike all over the country, which affected the railways. No trains were running. During that time my brother and elder sister, both having motorcycles, would take and collect my sister and myself from school each day. There was to be another strike in 1929, but by then I was old enough to cycle the eight miles to school, which I did for quite a time.

Mr. Percy Sheen of Moreton had obtained a ‘bus’ with which he conveyed pupils to and from school. I did travel on this first vehicle for a time, a Model T Ford and had the thrill of extinguishing a small fire when the red hot exhaust pipe set alight the wooden floorboards. I simply smothered it with handfuls of green grass, pulled from the roadside verge.

By the time I had reached the age of fourteen, I had obtained a licence to ride a motorcycle, and as my motorcycling sister had left home, leaving the motorcycle, I used it to travel to and from school. I therefore claim the honour of being the first scholar to attend that school on his own mechanical transport.

Our history master, a Mr. Shepherd, would occasionally come to school on his BSA motorcycle and side-car, He had somehow learned that I had a mechanical interest and a fair mechanical knowledge, for one day as he entered the classroom he said, “Jones, go out to my motorcycle and make it start as easily as yours”. I was elated. To be given the credit of possessing the ability to do so at a young 15 years, and also to have authority to skip most of that lesson. He did not request my ministrations again, so if I had been successful or not, I never knew.

Sometime after I began motorcycling to school, Noel Foster came on a new Francis Barnett machine. Ned, Bob, and Noel Foster all cycled from Stow on the Wold. Ned, the eldest, left almost as soon as I began school, but Bob and Noel were more of my age and therefore better known to me. Bob always cycled, yet it was Bob, not Noel who took up motorcycling when he left school. He became a rider to be noted in motorcycle trials and eventually took up motorcycle racing. Here he became famous and I believe he won the Isle of Man T.T. race one year at least.