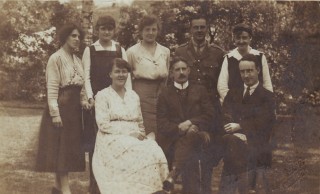 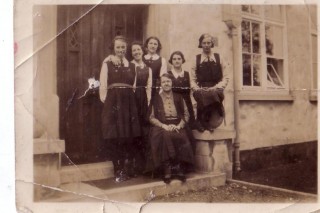 The funeral of Miss Mary Neill, B.A., who was the Senior Mistress at the Grammar School, Campden, for twenty-six years, took place on Friday, Dec. 3rd at Campden Parish Church. The Headmaster, members of the staff, and senior pupils were present, also a large gathering of her friends and old pupils to pay their last respects to one who was highly esteemed and loved.

The Vicar, (the Rev. Bryan O’Loughlin, M.A.) officiated at the ceremony, and was assisted by the curate, (the Rev.D. C. Lane, B.D.) The lesson was read by the Headmaster of the Grammar School, (Mr. J. W. Bright,M.A.), The family were represented by her brothers, Mr. John Clarke Neill B.A.,  Councillor Robert Neill, B.A., and her sister, Miss Agnes Neill. There were many beautiful wreaths.

The sudden passing of Miss Neill had been a shock to all who are associated with Campden Grammar School. She had retired from her position of Senior Mistress as recently as last May, but it was hardly realised that her time of leisured retirement was to be so brief.

Miss Neiil had been Senior Mistress since coming to Campden in 1917. She had served under Mr. Matthew Cox in the old school and Mr. W. J. Bright in the new building, and had seen the girls side of the school grow from small beginnings to its present importance.

An English Mistress, Miss Neill had perhaps a small opportunity of influencing the thoughts and ideals of her pupils, of inculcating and fostering in them a real appreciation of all that is best in English literature. As Senior Mistress she had not only the intellectual attainments, but the character building of the pupils at heart. Her standards both of work and conduct were high and she demanded the best ib both from all who came in contact with her. Their love and admiration of her was plainly demonstrated by both past and present scholars in many letters of appreciation received in connection with the presentation on her retirement.

The school and her scholars were her main interest, and she would do all in her power for the welfare of her pupils, yet she never shirked the unpleasant, for courage, quiet yet persistent was an outstanding feature of her character.

Her many acts of kindliness and generosity were modestly bestowed, and she fostered a like spirit amongst the children. Miss Neill it was who encouraged them to support the waifs and strays, Dr. Barnado’s, St. Dunstan’s, and latterly the Prisoners-of War Fund and the Merchant Navy, and to adopt the school’s special ship,  “SS. Oxford.”

Her spirit was essentially youthful, and she could enjoy to the full, with the children the seasonable pleasures and frolics of life. She was a real lover of the Cotswold countryside, and we who have known her for so many years, have enjoyed her good company on many a tramp over the rolling wolds.

It is fitting that her last resting place should be near to all that gave her so much pleasure.