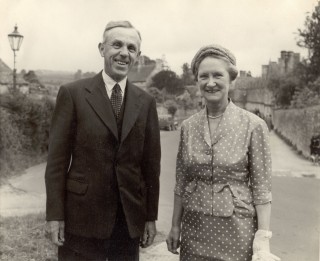 Mr and Mrs Heatherley. She was reputed to come from a moneyed family in Birmingham, the Mitchells and Butler’s Brewery, and to be related to the then infamous Sir Bernard and Lady Docker. She took us for French in our first year and some English thereafter.

POH, from P O Heatherly, was the French master who had a habit of getting everyone through GCE and its equivalents. We were the first class to take O levels and I remember some weeks before that exam Po was throwing our homework books back at us with his usual comments about minor and gross errors. He came to Knight and paused before the throw and then ranted about the disgraceful nature of Knights work and attitude. POH would not stand for it and did not want Knight in his class anymore but that he could hide in the back to avoid the notice of the Headmaster as long as he kept quiet, no classwork, no homework!

When we came out of the examination after the French paper POH collared Knight and said “I guarantee that you have got a high mark just to spite me, whereas you would have failed the way you were going on”. Although he was right on that occasion POH did miss out sometimes. I used to do David Tarplett’s French homework for the chocolate goodies he brought to school, being careful to add a deliberate mistake so that it would not be identical to mine. Then the bombshell, POH told Tarplett that his homework standard was above what he achieved in class and would he sit at the front and repeat last night’s work whilst he went on with the lesson. Tarplett did as he was told and after the appropriate time handed a sheet of paper to POH. I was expecting ructions as there was no way that David could match the one I had given him to copy. To my surprise POH apologised for doubting Tarplett.  Later I found that I had underestimated the man in as much that he had anticipated such a reaction from Po and had been making a second copy of the homework on a spare piece of paper for just such an eventuality.

My “soon to become best friend”, away from Leamington, was David Heatherley, a dayboy whose parents taught at the school. From time to time, David would spend some time in the holidays at Leamington. One recollection was some of the fun we had running up to the top of the Anderson shelter in the garden and jumping off. Doesn’t sound much fun now, but it was in those days. This shelter came in handy on a few occasions when the German air force was getting rid of what was left of his bomb load after dropping most of it on Coventry, just nearby.

As a little ‘aside’, David was able to get a pass to Uppingham School. A very upmarket private school and David’s father asked my mother if she would care to join him on the journey to take David for his first term. Mother agreed and thus David and his father arrived at our address in Leamington and then on to Uppingham. When parking, all occupants noticed that their Austin Seven and open trailer with the trunk standing upright in the trailer was to be parked between a Rolls Royce and a Bentley. When they looked around for somewhere else to park in order to be less noticeable, nowhere else had anything but top class autos so they stayed put but walked into school with heads held high.

I didn’t go home very often at weekends but from time to time was invited to David’s for strawberry teas and the like. This made up for it. It also meant that I could go fruit picking in the season to supplement my 2p pocket money. 1p for a stamp and postcard and 1p to spend at will. It was very rare if I didn’t go home at the end of the fruit picking terms with less than £2 which was indeed a fortune. I did however join the church choir since they also paid handsomely for weddings and funerals – two shillings and sixpence to be exact.

Perhaps Chipping Campden was the first time that I was made to break the law at that time (wartime). With my parent’s contacts in the village, there was an enviable flow of fresh produce and eggs available. The best way of transporting same was to use the Lockheed bus that went from a tiny shadow factory in the village to Leamington Spa every Friday night and returned on the Monday morning following. My part was to send a postcard (my weekly requirement) indicating that there would be some ‘carrots’ on the bus. I recall that ‘carrot’ actually meant eggs. I would take them to the bus driver and on arrival at Leamington he would drop them off at the Laundry, my father’s business.