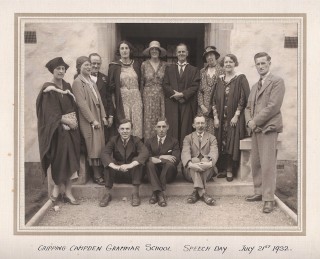 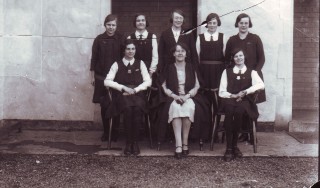 Many friends and former pupils of Chipping Campden Grammar School were deeply distressed at the news of the death of Miss H Terry, late senior mistress, who served the school so faithfully for over 30 years.

Miss Terry died after a severe illness at her home at Catbrook, Chipping Campden, on Saturday at the age of 65.  She was born at West Hartlepool and took her teacher’s training at St Hild’s College, Durham.  After teaching at Ambleside and service as an officer in the W.A..A.C. during the 1914-18 war, she came, in September, 1920, to Chipping Campden to take up an appointment on the staff of Chipping Campden Grammar School as games mistress and teacher of junior work.

Miss Terry entered into her duties and the life of the town with unsurpassed vigour.  She maintained this quality undiminished until she retired in July, 1953, after 32 years’ service.

Her influence in every department of school life has been invaluable for, among other things, she set and maintained that all-important quality – the tone of the school – at a very high level.  Through all the years of her service, years which saw many changes both in the school and the town, Miss Terry’s main interests –those of the pupils – persisted untiringly.  She was always accepted as the unfailing friend of all.

As senior mistress, Miss Terry continued the good work of Miss Neill, and as secretary for the Old Scholars’ Association for many years, she did valuable work.  After her retirement, she continued her interest in the school.  As leader of the local Civil Defence Corps and secretary of the Campden Debating Society, she showed persistent interest in the life of the town.”

After her death £650 was collected to establish an annual prize in her memory. By a declaration of Trust dated June 1958, made by the Head Mr Alan Jones, the money was transferred to the Charitable Funds. Today, the Trustees of the School Charity make awards during the year based on student applications for financial help with travel or projects. In 2009-2010 awards were given to Jack Bridges, John Morton, Nicholas Hudson, Edward Holmes, Jessica McNeill-Wilson, Trudy Tsang, Jack Murphy and Pelham Grosvenor-Stevens.

Did you benefit from the Hilda Terry Travel Award? What is your story?