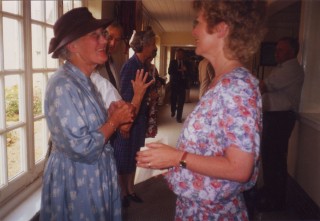 July 1981: – A large number of past pupils and staff were present at the ceremony in the Assembly Hall at Chipping Campden School to say farewell to Miss J.M.Bint, who retired after thirty-six years as head of the school’s home economics department.

She was presented with a long service award and a pair of silver salad servers by Mr. Peter Daly on behalf of the county education committee and a silver tray and cheque by the headmaster, Mr. P.T.Sandry on behalf of the pupils and staff of the school. Mr Sandry said Miss Bint was held in great affection by a great many people.

Mr Alan Jones who was headmaster of the school for twenty-five years said Miss Bint took over the domestic science department at the school in January 1946 and continued throughout her career to hold that post. She had come to the school when there were still boarders and she had seen enormous changes in the education system.