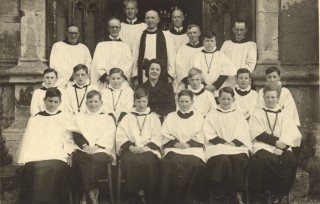 Mrs. Phyllis Horne, 10, Haysum’s Close, Chipping Campden, who died in the Ellen Badger Hospital, Shipston on Stour, on November 16th, was for many years a prominent personality in the musical life of Campden. Aged 76, she is survived by her husband, Mr. John Horne, well known as a local historian, whom she married in 1930.

As a licentiate of Trinity College of Music, she taught music part-time at Campden Grammar School for many years and was organist and choirmaster of St. James’s Parish Church from 1947 to 1973 and thereafter assistant organist. She had a long association with Blockley Choral Society, for which she served as a committee member for some time. She was accompanist for other choirs in the district, notably at Paxford, and was concerned in the organisation of various musical events.  Until shortly before her final illness, Mrs. Horne still taught the piano to a select number of pupils.  Besides taking an interest in other aspects of the town’s cultural life, she was also a Justice of the Peace. Mrs Horne’s only daughter, Joan Brearly, also a promising musician died in 1969.