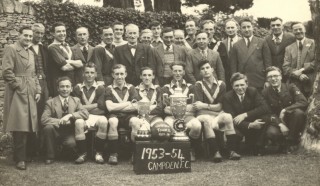 A large number of old scholars gathered in the grammar school, Chipping Campdenst week, for a presentation to Mr. T. Winward, a senior member of the teaching staff in length of service, who retired at the end of the Easter term. He had been at the school for thirty-five years.

A cheque was presented to Mr. Winward by Mrs. Peter Lloyd, chairman of the Old Scholars’ Association, who spoke of his hard work and unfailing devotion to the school and the association, of which he had been treasurer for many years. Donations totalling £55 were received from many old scholars in various parts of the country.

Mr W.J.Bright, former head master, recalled the time in the early 1920s when Mr. Winward arrived at the school & said he had been a tower of strength ever since. At one time he had been a very able footballer & he (Mr. Bright), Mr Heatherly & Mr Winward had been a force to reckon with in the school football team. It was always sad to say goodbye to someone who had been associated with the school for such a lonng time, but everyone would join in wishing Mr.Winward a very happy retirement.

Mr Winward said he was very grateful for the kindness & generosity which had been shown him. It was a long time since January 1921, when he had arrived at the school to teach chemistry and take charge of games, but those early days were still very vivid in his mind. As regards chemistry, the premises were extremely limited and one could have jumped in less than two strides across the laboratory. He remembered playing in the the school football team, Mr Bright being at centre-half, Mr. Heatherly at right back and he at left back. They had been a very good team, capable of taking on any team in the district.

‘I think the vast majority of scholars who have passed through this school’ said Mr,Winward  ‘take great pride in what they recollect of their associations here and are particularly jealous of the reputation of the school. I notice when I go to any remote village in this district, I always come across an old scholar who speaks with satisfaction of his stay here.’

Mr. A.L.Jones, head master said, ‘We are very conscious of the immense service that Mr. Winward & people like him have given – people who devote their whole lives to teaching in a particular school. Although this is a relatively new building, we are in fact one of the ancient foundations of this counrty, and I feel that old age in a school means a great deal. We all know this is an old school – we go back more than 500 years – and yet if you stretch 14 Mr. Winwards end to end, you have gone right back to the beginning. I think this puts things in perspective and shows you what a man like Mr. Winward can do for a school. We are very conscious of the past & shall remember Mr. Winward as we go forward into the future.’ Mr Jones wished happiness to Mrs. Winward who also attended the presentation, & said he hoped she & her husband always felt linked to the school.

At the end of term assembly at school last week a further presentation of a cheque for £23 was made to Mr Winward from present scholars & staff at the school. The Governors presented Mr Winward with a wrist watch in recognition of his services.

Mr WINWARD was our science master. We took general science at “O” level which allowed those of us in the science sixth to add chemistry, physics and additional mathematics to our “O” level resume after a year in the sixth.

I cannot remember much about science prior to arriving in the sixth but I had a whale of a time for the two years I was there, especially in chemistry.  Mr W sat in his office at the back and we would discuss what I felt like doing and then I was on my own as the sole first year chemist. I covered the gamut of qualitative and quantitative inorganic analysis and such inorganic experiments that took my fancy but my real love was organic preparations although qualitative analysis was not forgotten. I was very grateful to Mr W whose loose rein enabled me to do things that not many students of my age were able to tackle and stood me in good stead when I started tertiary studies.

There were some disadvantages, the fume cupboard fans had died and so some experiments were carried out on the window sill or just outside. On one occasion Mr W had asked me to prepare a demonstration for him. This involved filling a metre long tube with chlorine gas in which ammonia would then be “burnt” in one of the most spectacular of experiments. I set up a chlorine generator on the window sill of the lab to accomplish this task, opened all the windows and the door into the corridor and went off to lunch. Nothing could go wrong as no one was due in the lab and a through draft would harmlessly disperse any excess chlorine.

When I got back from lunch I found that a new junior science master had unexpectedly decided to take a first year class in the lab and, having got them there, was called away.  Left on their own for a short while the young ones had decided that they did not like the draft and shut the door and windows. Luckily both the the junior science master and I returned before too much had been breathed in and a few minutes on the playing field was enough to effect a recovery.

As a chemist I was naturally interested on explosions and we gingered up bangers on November the fifth. Spons Workshop Receipts was not available to us at the time so our efforts at rockets etc. were dismal failures. Mr W had devised a marvellous way of disposing of flasks which did not succumb to the final cleaning agent, chromic acid. Fixed in cork, which would fit any flask, were a couple of electrodes in acidulated water to generate  a hydrogen/oxygen mixture when a dc voltage was applied. Two more wires were connected to a high voltage transformer in order to detonate the gaseous mixture and destroy the flask out on the school lawn.

We also made the wrongly named nitrogen tri-iodide for scattering on the dance floor to produce small explosions an puffs of violet iodine vapour. Sometime in my career I prepared silver acetylide which was supposed to be a sensitive explosive when dry. I left some in the lab drying between two sheets of filter paper and took the rest with me when I went home for lunch. I tried hammering my product on a flagstone in the kitchen with no result. That is until my Mother stepped on the flagstone holding the casserole which was to be the family lunch. There was a satisfactory bang followed by the crash as my startled Mother dropped the casserole onto the floor followed by instant chastisement by my hungry Father. Returning to school I found that the junior science master had put the remainder into the drying oven to keep it away from his class. They were amused when a small explosion blew the door of the oven open.

Early on in my career I managed to injure myself by managing to put my fist through the glass on one of the doors in the corridor. The resulting cut ran from the tip of my little finger to several inches up my forearm and was deep enough to have sliced into an artery judging by the way the blood was pulsing out. I was rescued by a female teacher and Mr Winward applied a tourniquet to stop the bleeding. I was feeling rather woozy and was being led up the corridor by the said female teacher to be taken to the Doctors surgery to be spliced up. I then heard footsteps and Mr Winward caught us up, explained that the science sixth might like to study it , loosened the tourniquet, caught 200 ml of my blood in a beaker before tightening it again and letting us go.