Mr. Ian Frederick Tilbrook, of Berrington Cottage, Campden who has died in Stratford Hospital, aged 68, was a former deputy head of Chipping Campden School & one of the longest serving members of Broadway Golf Club.

Born in Keighley, Yorkshire, Mr. Tilbrook attended Wath Grammar School, then went on to Sheffield University where he graduated in geography in 1936. His first teachin post was in South Africa but he returned to this country & in 1939 joined the Royal Marines. He served mainly in the Far East & was discharged with the rank of Captain in 1936.

That same year he came to Campden Grammar School as geography master & remained at the school until his retirement thirty-one years later. He was closely involved with sport, particularly swimming, during his early years at the school. He also helped to steer the school through the upheavel of building changes to form a new comprehensive, of which he became deputy headmaster.

He was involved with Campden Dramatic Society at one time, both as an actor & director, & was a past master of the Campden Lodge of Freemasons. His main interest, though, was Broadway Golf Club to which he had belonged for thirty-seven years, having held office as president, captain & secretary at various times.

Mr. Tilbrook was married in 1948 & he is survived by his wife, three children & three grandchildren. 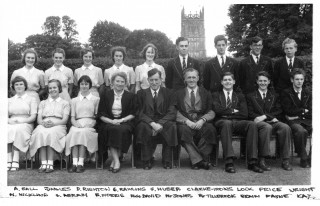 Mr Tilbrook was the geography master, was reputed to have been a Royal Marine Commando during the war and was certainly not someone to be messed with. He had done some world travel at some stage and in addition to learning our way around an ordnance survey map, to how winds and ocean currents gave rise to the diverse regions of the world we were also told:

Plus stories of slaughter houses in Argentina etc

Having once come second in one of his end of year exams I was disappointed to get the comment “Could do better”.

Yes he was very pithy about pupil achievements, or lack of them. Having usually come towards the top of the class, one end-of-term result saw me placed 28th. ‘How have the mighty fallen’ was his dry comment, with a somewhat sarcastic smile.