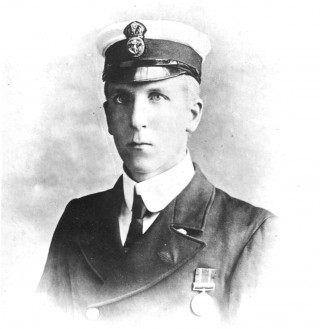 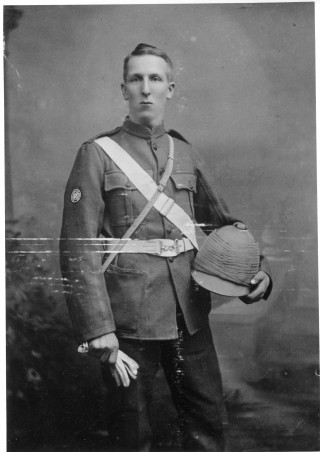 Basil was born in Wood Green in London, the youngest son of Julius Robert and Isabelle Emma Neve, and was baptised at St. James’s Church in Campden on 30 March 1892, when he was 16 years old. His parents were married at Faversham in Kent on 8 March 1870 and when they came to Campden Julius was a postmaster and a draper in the High Street.

Basil was educated at Campden Grammar School and then began an apprenticeship with the Great Western Railway Company at their engineering works in Wolverhampton. He volunteered to join the St. John Ambulance Company during the Boer War in South Africa and was posted to the Imperial Yeomanry Hospital staff. After returning safely from South Africa he enlisted in the Royal Navy at Chatham on 17 April 1901. His medical passed him fit to serve but noted that he had blue eyes and scars on his wrist and knee. Basil began his service with the Royal Navy as an engine room artificer 4th class at HMS Pembroke, a depot in Chatham. He was then promoted to engine room artificer 3rd class on 3 August 1908 while he was on HMS Bedford. Further promotions followed and on 14 April 1913 he became an engine room artificer 1st class while serving on HMS Yarmouth.

Basil joined the crew of HMS Pathfinder as a chief engine room artificer in July 1914. She was a light cruiser and was launched in 1904. After her initial naval service, which saw her in the Atlantic Fleet and the Channel Fleet, she joined the 4th Destroyer Flotilla and was stationed at Portsmouth. In October 1913 she joined the 8th Destroyer Flotilla and when Basil joined the crew she was patrolling off Northern Ireland. When the war started she was stationed in the Firth of Forth and on 5 September 1914 she was torpedoed off St. Abbs Head by a German submarine, U21, with the loss of 259 lives, including Basil, who was the first Campden man to die serving his country during the war. HMS Pathfinder was the third naval casualty of the war.

The Evesham Journal reported Basil’s death: “We regret to announce that the first victim of the war in Campden is Basil Hoveden Neve who lost his life in the destruction of HMS Pathfinder off St. Abbs Head in the North Sea on Saturday. He sailed on the cruiser HMS Bedford with Prince Louis of Battenburg to the United States and with King Edward VII on a visit to Kiel. He was lent to HMS Pathfinder for the Great Review at Spithead and with war breaking out he remained with her. At the time of the disaster he was ranked as third engineer on board and was well on his way to more promotion.”

Basil had married Helen Rolandson Ley at Govan, Lanark, Scotland on 11 April 1912 and when he died she was living at 80 Rainham Road in Chatham. There were no children.