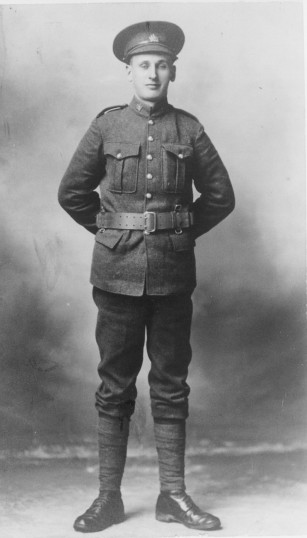 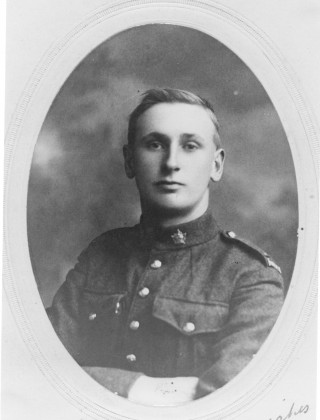 Fred was born in London, the son of Herbert and Elizabeth Osborn. His father was a woodcarver and together with his brother, William, moved to Campden in 1902 to work with Charles Ashbee at the Guild of Handicraft. The family lived in Watery Lane and Fred was educated at Campden Grammar School. After the disbanding of the Guild the family moved back to London, where Fred soon became ill and was advised to move to a location free from smog. He had kept in touch with an old school friend, William “Wilfred” Leo Merriman, who had emigrated to Canada, and in 1913 Fred decided to join him. He was employed as a labourer on farms in the Poltimore area, sixty miles north of Ottawa, and in 1914 was joined by his parents and brothers, Harry and Bert.

Fred enlisted in the Canadian Army at Ottawa on 12 February 1916, when he was 19 years old. He was five feet seven inches tall with blue eyes, light brown hair and a fair complexion. During his time at Valcartier Camp he was admitted to hospital with measles on 2 July 1916 but was discharged six days later after it was diagnosed as influenza. After seven months’ training in Canada he was posted to the 136th Overseas Battalion, Canadian Expeditionary Force and embarked for England at Halifax on HMT Southland, a White Star Liner, on 26 September 1916. The Southland was a German boat captured by the British. While carrying troops through the Mediterranean to the Dardanelles she was torpedoed by a German submarine but was able to reach port, where she was repaired. The food on the journey to England was good and Fred wrote home saying, “We got eggs and bacon for breakfast and for dinner, fowl and boiled bacon. The chicken I got was great and I had two helpings. We got pudding after and apples.”

They arrived at Liverpool on 6 October 1916. Fred was transferred to the 36th Battalion and posted to West Sandling Camp in Kent. In December 1916 he wrote home, “Well mother, I expect to leave for France tomorrow and I am going to join the Royal Canadian Regiment. You see they asked for 45 volunteers for a draft for the RCR and I volunteered. That was at 1.00pm and we had a medical examination, kit inspection, close crop hair cut and new stuff this afternoon and are ready to leave tomorrow. So I guess I will eat my Christmas dinner in France. Don’t worry about me darling mother or call me a fool as I would have been drafted after Xmas anyway. Perhaps I may be foolish but God knows I’m no coward and I’ll stick to it to the last.”

Fred arrived in France on 23 December 1916 and on 1 April 1917 he died of wounds received at 9.00am when he was accidentally shot in the right hip when a rifle was fired in his dug- out near Vimy Ridge in France. His death was officially recorded as “accidental”. He was 20 years old and was buried in Ecoivres Military Cemetery.

Fred’s brother Harry got a job in Ottawa during the war as a machinist in a factory making shell cases and soon his parents and brother Bert joined him in Ottawa. Bert was an accomplished engraver and he engraved many of the Mothers’ Silver Crosses that were sent to the families in Canada of men killed in the war.

Bert died in 1925 and Fred’s parents were ageing. His father was unable to work and as he had no pension an application was made for a survivor’s pension on behalf of their son Fred. In 1932 they finally began to receive a war pension. Harry secretly supplemented their groceries and rent payments. He was “keeping the faith” with Fred as he was always conscious of the fact that he had not passed the medical for military service and so had not served his country as had Fred. He did his part working in arms factories and looking after his parents as Fred had requested.

Fred does not have his name recorded on any memorials in Campden. In 2002 the author visited Fred’s grave and was able to send photographs to Norah Goodman, daughter of Harry. In her thank-you letter she wrote, “I suppose you are the very first person to have paid a visit there purposely to visit him in all the years he has lain there. His father and mother would be so pleased to think that somebody has taken the trouble to do so.”