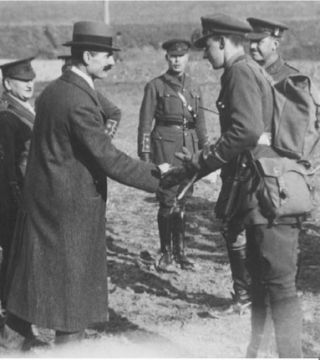 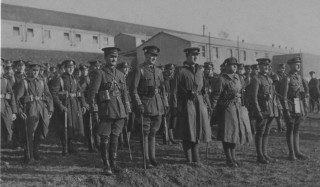 Ernest was born in Evesham, the only son of George and Sarah Ellen Crisp of 9 Market Place, Evesham, where they ran the post office. He was educated at Campden Grammar School and then found employment as a bank clerk at the Capital and Counties Bank in Daventry.

The battalion embarked at Folkestone and arrived at Boulogne on 21 November 1915. The next month was spent making their way on foot to the Somme battlefield. The weather was wet and daily marches were typically ten miles long. Billets were found in barns and houses in the villages that they passed through. The battalion finally arrived at Suzanne, on the northern banks of the River Somme, at 10.00am on 13 December. Tents were provided in the grounds of the château. The weather was very bright but the roads were extremely muddy. On 14 December the officers and non-commissioned officers of “B” and “D” Company visited the trenches for their first period of instruction. Two men were killed during this time in the front line before they returned to Suzanne at 9.00am on 15 December. Later that day, at 4.00pm, the same group made their way into the trenches for their second period of instruction in the front line. Ernest was a member of an instructional bombing expedition into No Man’s Land and was wounded twice. He made it back to his own lines but died of wounds the following day.

Ernest died on 16 December 1915 aged 24 years and is buried in Suzanne Communal Cemetery Extension, Somme, France. He was the Company’s bombing officer and died of wounds during his first time in No Man’s Land, less than a month after arriving in France. His name is recorded on the war memorial in Campden School and in Evesham Park. There is also a memorial plaque in St. Laurence’s Church in Evesham, where he was a regular member of the congregation when he lived there.

His parents received a letter from Ernest’s commanding officer that said, “With more regret than I can express I have to inform you that your dear son was killed in action yesterday. With another officer he went on a bombing expedition and got into the German lines and did excellent work, but whilst doing so he was shot through the shoulder, and whilst returning to our lines he was hit by shrapnel, which smashed his thigh. One other man was killed. I saw your son an hour after he was hit and told him how proud I was of him and his work. He was very weak but in no pain. Two doctors were with him and everything possible was done but the dear fellow died in the afternoon and was buried with full military honours. I have to mourn the loss of one of my best junior officers.”