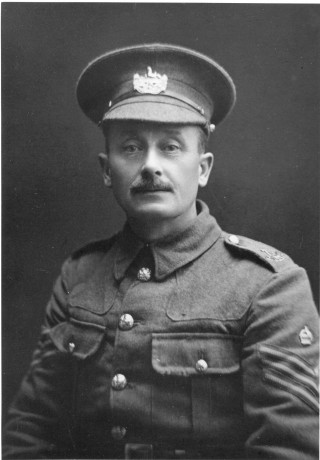 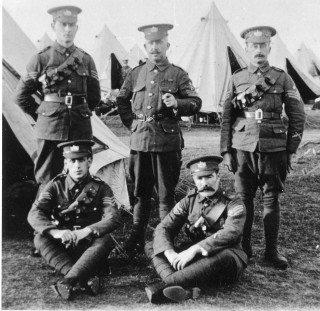 Lewis was born in Campden in 1868, the son of James Newton and Elizabeth Horne of Leysbourne, Campden, and was baptised at St. James’s Church on 21 December 1868. He was educated at Campden Grammar School and then employed in a variety of jobs. In 1891 he was an assistant in a corn-trading business and in 1901 a farmer and coal merchant.

His wife was Muriel Jesse Neve, the sister of Basil and Gerald, and they had six children, including two sons who served during the 1914- 18 war, John Newton and James Willetts.

In “K” Company, 2nd Volunteer Battalion, Gloucestershire Regiment Lewis was the colour- sergeant. He then became the company sergeant-major in “H” Company, 5th Battalion, Gloucestershire Regiment, the local company of the Territorial Army, with whom he served on the Western Front during the 1914-18 war. He was a good marksman and won several trophies on the rifle range.

Lewis was mobilised on 5 August 1914 and went to Chelmsford for final training before the battalion arrived in France on 29 March 1915. The next few months were spent in the Ploegsteert sector in Belgium before they moved south to the Somme. On 28 May 1916 Lewis was accused of a “green envelope” offence and there was a court martial. Only a small sample of “green envelopes” were opened, as the men were trusted not to give information that might be helpful to the enemy. Lewis had one of his envelopes opened and an officer was not happy with what he saw. The initial court martial was adjourned to gather further evidence. It met again on 8 June 1916 at Capennes and Lewis was found guilty and reduced to the rank of sergeant.

Before the war Lewis was the Campden correspondent for the Evesham Journal for more than twenty years and he continued sending letters from France during the war to keep the people at home informed about what was going on. “Before going to the trenches last week nearly the whole of the company went to Holy Communion. It was held in a barn, full of stores, and the men sat on bags and sacks over which the chaplain had to climb.” He also added that “the little New Testaments sent by the vicar and supplied to the men are in constant use”.

At Christmas in 1915 the Evesham Journal printed the following piece about Lewis. “He is an old Territorial, and although a married man with a family and within a year or two of fifty years of age he had no hesitation about offering his services when the war broke out. The miseries and hardships of trench warfare, up to your knees in water for days, together with death hovering near, have not disheartened him. His initial period of service has expired but knowing that the job must be finished, and that all men are wanted, he has signed on again.”

Lewis served in France until he returned to England on 11 July 1916, where he was posted to the Territorial Force Reserve. The remainder of the war was spent on home service until he was discharged on 21 January 1919. He then returned home and held many public offices during the rest of his life. He was an excellent cricketer and in 1925 was playing for Moreton-in-Marsh. He took an active part in securing the admission of girls into the Grammar School and was a sidesman at St. James’s Church and a regular member of the congregation at Broad Campden Church.