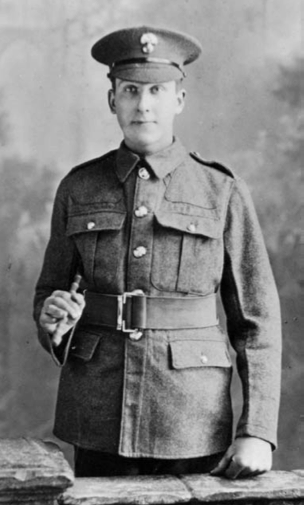 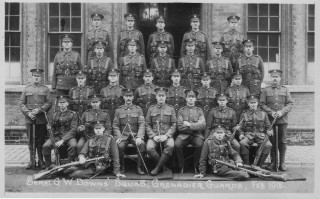 Jack was born in Campden in 1899, the eldest son of Lewis Hadley and Muriel Jesse Horne of Leysbourne, and was baptised at St. James’s Church on 18 November 1899. His father was a farmer and coal merchant and during the First World War he served with the Gloucestershire Regiment. His mother was the daughter of Julius and Isabelle Neve.

After leaving Campden Grammar School Jack enlisted at Worcester in the Grenadier Guards on 18 October 1917 aged 18 years. He was passed fit to serve at his medical examination and his next of kin was his mother, who was then living at “Wellacres” in Blockley. Jack joined the regiment in Caterham and was trained for mounting the guard at Buckingham Palace, St. James’s Palace and Marlborough House, a job that Jack was very proud to do.

In March 1918 they were told that a detachment was going to be sent to France to join the 2nd Battalion, Grenadier Guards. Jack arrived in France on 28 April and the detachment travelled to an area 10 kilometres south of Arras by rail in box trucks labelled “8 chevaux, 40 hommes”. The comradeship was wonderful and there was always a good deal of humour amidst the men.

Jack remembers being close to Adinfer Wood and during the night it was amazing to hear a chorus of nightingales; usually during the night the wood was shelled frequently. After an explosion the birds stopped, but it was not long before they continued their song. In June 1918 the unit was withdrawn to Saulty-aux-Bois and the officer took the men into a field to form up. There was a cow in the field and soon a French peasant came at them with his fists. He was angry because the men were spoiling the grass for his cow. Needless to say, the unit soon withdrew.

In July 1918 Jack was promoted to lance corporal and in August was badly wounded when he was shot through the elbow and lost a thumb. He returned to England on 31 August and four months of treatment followed before he was discharged from the army on 20 December 1918. It was arranged for Jack to be admitted to Farncombe House near Broadway for treatment, a VAD (Voluntary Aid Detachment) Hospital which later became a Group 4 security centre. After the war his arm was useless.

After returning to Campden Jack was a corn and seed merchant and also had a taxi and a bus available for private hire. In 1930 he married Phyllis Boulten in Bretforton and they had one daughter, Joan Frances, who married Rex Brearley in 1956. During the Second World War Jack was a 2nd lieutenant in the Home Guard and was the commanding officer of the 40th Platoon, 2nd Battalion, Home Guard, Gloucestershire Regiment.