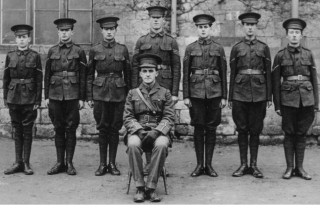 Guy was born at 164 Hunter Street in Buckingham, the son of William Cottell Hazelton. His father, a native of Southampton, was a veterinary surgeon and he married Margaret Hannah Gough in 1893.

Guy was educated at Campden Grammar School and was Head Boy in 1913 and 1914. He was given the nickname “Gaffer Hazelton” when he became a sergeant in the Cadet Corps. After leaving school he enlisted in the Royal Fusiliers on 31 July 1915. He served overseas with the 7th Battalion but was discharged from the army on 1 January 1918 owing to sickness.