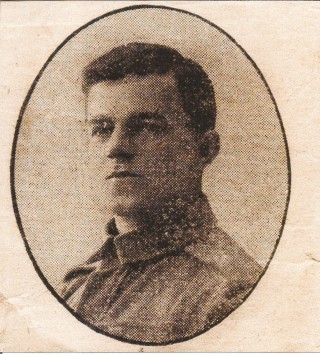 Harry was the second son of Charles and Mary Coldicott of Mickleton Wood Farm and was educated at Campden Grammar School. He was keenly interested in the training of Boy Scouts and he trained a very smart company of lads from Hidcote Bartrim and Mickleton. In the Spring of 1913 he emigrated to Australia with a group of former Boy Scouts and found employment working in an orchard growing fruit.

At the outbreak of war he was serving with the 15th Australian Light Horse and had previously served in the Warwickshire Yeomanry with his brother Arkell in England. He enlisted in the 4th Australian Light Horse Regiment at Broadmeadows in Victoria on 25 August 1914, when he was 26 years old. He was passed fit for overseas service and his medical report stated that he was five feet six inches tall with yellowish eyes, brown hair and a fair complexion.

He embarked for Egypt at Melbourne on the troopship Wiltshire on 18 October 1914, a departure delayed by the outbreak of measles in the unit. They arrived at Alexandria on 8 December 1914 and then settled at Mena and commenced training. They completed their training at Heliopolis, at the apex of the Nile delta, and embarked for the Gallipoli Peninsula. They landed at Gaba Tepe on 20 May 1915 and served on the peninsula until they were moved to rest camps on the island of Imbros on 14 July. After returning to the front on 22 July they were involved in devising ruses to attract Turkish artillery fire and reveal the locations of their guns.

Sickness was rife in the trenches and Harry developed a hernia. He was conveyed, sick and wounded, to Alexandria on the hospital ship Nevasa and admitted to Number 3 Auxiliary Hospital at Heliopolis on 19 September. There he contracted influenza and was sent to the ANZAC Convalescent Depot at Helouan, becoming fit for service on 12 November. He rejoined his unit at Heliopolis on 2 January 1916. The Evesham Journal reported that Harry “saw some hard service at Gallipoli and received a wound in the head”. His service papers state that it was in the hand.

He had only been back with his unit for three weeks when he developed mumps and was admitted to Number 4 Auxiliary Hospital at Abbassia. He was discharged on 8 February and at the end of March he embarked with his unit at Alexandria on the troopship Castrian. They disembarked at Marseille on 27 March 1916 before moving to the Western Front west of Bailleul. The following month he was found guilty of disobeying orders when he was out of bounds at Strazeele and awarded 21 days’ detention by his commanding officer.

Harry was away on leave for two weeks beginning on 25 September 1916. On 12 January 1917 he developed influenza and was admitted to the 3rd New Zealand Field Ambulance before being discharged to duty three days later and rejoining his unit, 2nd ANZAC Light Horse. He was detached from his unit on 16 April 1917 for duty with the New Zealand Division but returned on 22 April.

Harry died of wounds received in action on 7 June 1917, the opening day of the Battle of Messines. The battle was planned as a preliminary to a major British offensive further north, its objective to capture the strategically important ridge that dominated the British lines south of Ypres. The battle started at 3.10am when nineteen mines were exploded under the German trenches. Nine divisions took part in what is often described as the best-planned British operation of the war. The Evesham Journal reported details of Harry’s death: “He was one of the patrol going out with the advanced squadron when he was hit by a fragment of a high explosive shell in the right side of his head above the forehead. He never regained consciousness and died without any pain in a field hospital behind the lines the same day. He was with his old friend, Clive Doyle, and enjoying being in action. Everything that could be done was done for him at once by our aid post and he was carried away by our own stretcher bearers.” This account differs from the one recorded in his service papers, which states that he died of multiple gun shot wounds at the 77th Field Ambulance.