The School Cadet Corps is formed 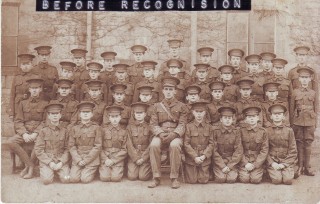 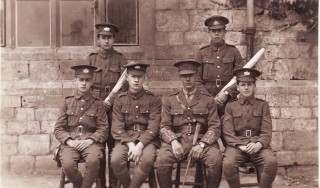 In 1914 the whole country was gripped by the militaristic fervour of war.

At the Speech Day in December 1914 the headmaster, W. Cox, said, ‘The public schools have their Officer Training Corps and it seems to me it will be a good move when the Board of Education issues another circular that no school will be recognised unless a large percentage of boys from 12 to 14 are proficient in the rudiments of drill, and a large percentage from 14 to 18 equally so in the use of the rifle. I hope, though we are a small school, we may soon run to a rifle range, and after a reasonable amount of time, taken from that at present devoted to other sports, I am quite sure our boys will be quite prepared to shoot anything or anybody.’ (Evesham Journal)

In January 1915, the School Governors agreed to set up the Rifle Corps, according to the War Office regulations, and in October the Headmaster reported that ‘the training of the boys was going on very satisfactorily and it was necessary that funds should be got together to provide them with uniforms’ (Minutes of Governors’ Meeting). Private subscriptions were raised and finally the uniforms and equipment were provided.

The Officer in Charge was Lt. Henry John Dyer Cossins. Paul Hughes writes: ‘At the outbreak of war in 1914 he joined a service battalion of the Royal Warwickshire Regiment as an instructional officer and then in 1915 he was appointed Second Master at Campden Grammar School, where he became known as ‘Dixey’ Cossins. Over the next three years Dixey was the Officer commanding the Cadet Corps and he moulded them into an efficient unit.’ Capt. Cossins was called up in 1918 and did not return to the school after the end of war.

In 1920 Wilfred Bright, having served as captain in the Royal Field Artillery, came to teach at the school and took charge of the Cadet Corps. He left for another school a year later but returned as Headmaster in 1927.

Between the Wars the Rifle Corps became the Air Training Corps 1356 (North Cotswold) Squadron, Commanding Officer Ft/Lt. C. Rayner-Booth, also a School Governor. During WWII, Albert Unsted came as an assistant teacher with Millwall Central School, which was evacuated to Campden. In September 1942, Rayner-Booth recommended him for a long-term post at the Grammar School, as he had technical qualifications and was a Pilot Officer with the ATC. This was initially refused by the Board of Education but Unsted stayed and became the woodwork master until his retirement in the early 1960s. Mr & Mrs Unsted are remembered for their lunchtime ballroom dancing sessions in the school hall. Although Mrs Unsted was larger than her husband and they looked an ill-assorted couple, they were remarkably nimble in their steps and the sessions were popular – with the girls, the boys stayed away!

Do you remember Albert Unsted?

What are your memories of being in the ATC?

Do you have any photos?

Please add your stories to the archive here.