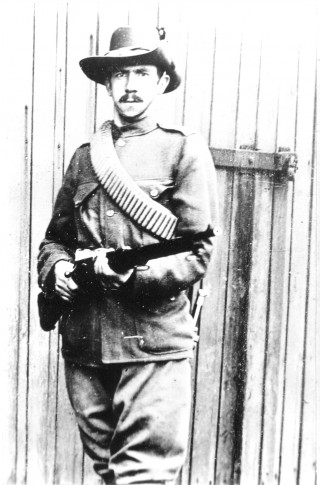 Gerald was born in Maidenhead in Berkshire in 1874, the second son of Julius Robert and Isabelle Neve. His father was a postmaster and draper in Campden and Gerald was educated at Campden Grammar School. After leaving school he became a farmer and then he served with the Worcestershire Yeomanry in South Africa during the Boer War. He returned safely from the war and then married Blanche Carrie Louisa Bates on 9 August 1902. Their first child, Ruby Isabelle, was born on 12 June 1903.

The family emigrated to Canada and set up home at 1611 Hearst Avenue, Berkeley, Calgary. Gerald continued to work as a farmer. He joined the local Militia and served with the British Columbia Horse. On 29 June 1915 he enlisted in the Canadian Army at Vermont aged 41 years. He was passed fit for overseas service and his medical report states that he was five feet nine inches tall with blue eyes, brown hair and a dark complexion. There were also three vaccination marks on his left arm.

After a period of training in Canada he arrived in England on 23 November 1915 and the next nine months were spent preparing to be posted to France. Gerald embarked for France with the 47th Battalion, Canadian Expeditionary Force on 10 August 1916. After serving at the front for three months he was buried by the explosion of a shell and suffered a sprained back and right foot in early November 1916. This resulted in his being admitted to Number 1 Canadian General Hospital at Etaples before being evacuated to England, where further treatment began on 14 November at 2nd Western General Hospital in Manchester. He was then discharged from hospital and posted to Shoreham. His ankle continued to give him trouble and he was admitted to a Canadian convalescence hospital at Woodcote Park in Epsom on 18 January 1917.

After being passed fit for further service Gerald was sent to Seaford and seconded to the British Columbia Regiment before joining the 1st Reserve Battalion. On 30 May 1917 he was admitted to hospital again with a sprained right ankle but had recovered sufficiently to be sent to France to join the 47th Battalion on 19 June. After a few months at the front he was transferred to the Canadian Labour Pool in France on 11 March 1918. Gerald was now medical category B1 and almost 44 years old. He remained in France until after the end of the war and returned to England on 9 May 1919. He left England on 6 June 1919 and returned home to Canada, where he was discharged from the army in Vancouver on 20 June 1919. After he had returned home to his wife and child the family moved to 1917 Francesco Street in Berkeley.

Gerald died at Shaughnessy Hospital in Vancouver on 24 May 1965 aged 91 years.