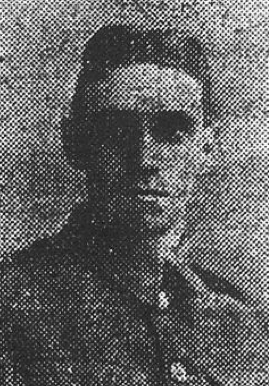 Leslie was born in Campden in 1895, the youngest son of Henry Joseph and Rose Ellen Hands of High Street, Campden, and was baptised at St. James’s Church on 2 June 1895. His father was a chemist in the town and when he retired in 1908 the family moved to Bournemouth. Leslie was educated at Campden Grammar School but at the outbreak of war in 1914 he was living at Portland in Dorset. He enlisted in the Royal Fusiliers at Weymouth in January 1916 and after a period of training in England was posted to France, where he joined the 11th Battalion in the Somme sector.

He received a gunshot wound in the thigh on 17 February 1917 at Boom Ravine and after being evacuated from the battlefield was admitted to Number 6 General Hospital at Rouen. Wounds in the thigh were a big killer during the war owing to blood loss and Leslie succumbed to his wounds on 4 March 1917. He was 21 years old and is buried in St. Sever Cemetery Extension, Rouen, France. His name is recorded on three memorials in Campden: in St. James’s Church, in Campden School and in the High Street. At the time of his death in 1917 his mother was a widow and living at “Cotswold“, Keswick Road, Boscombe, Bournemouth. She died in 1939 aged 85 years.

Boom Ravine is a system of sunken roads shaped roughly like a T, situated south of the River Ancre between Petit Miraumont and Grandcourt. The Battle of Boom Ravine on 17 February 1917 is among the less well-known engagements on the Western Front. It took place in the depths of winter, three months after the First Battle of the Somme had come to a slithering, slushy and miserable halt in November 1916. It was a short, sharp and, from the British point of view, not very successful battle in ghastly conditions. The British failure and loss of life were, on this occasion, very largely due to treachery. A man, or men, from a British regiment willingly and wilfully gave information to the Germans which allowed them to prepare a vigorous and determined response to the attack.