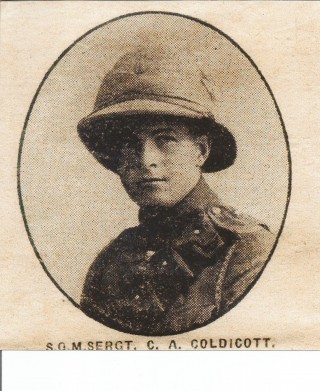 Arkell was the eldest son of Charles and Mary Coldicott of Mickleton Woods Farm. He was educated at Campden Grammar School and then found employment as an ironmonger’s apprentice. He enlisted in “D” Squadron, Warwickshire Yeomanry at Shottery in 1902. The Yeomanry was the mounted reserve of the Regular Army and in 1912 Arkell was awarded the Territorial Forces Efficiency Medal.

At the outbreak of war in August 1914 Arkell was employed farming a hill near Stanton and was immediately mobilised and joined the Warwickshire Yeomanry at St. John’s in Warwick. On 14 August 1914 they moved to Bury St. Edmunds and then to Newbury Racecourse, where they were inspected by the King. After further training the regiment embarked at Avonmouth on 11 April 1915 to join the force being concentrated in Egypt for the landings at Gallipoli. They had 763 horses on board and sixty miles north-west of the Scillies they were torpedoed, but did not sink. They were towed to Queenstown, County Cork and after only a short delay they arrived at Alexandria on the Saturnia on 24 April 1915. A further 357 horses were bought locally for the regiment.

The first landings at Gallipoli were made on 25 April 1915 but the Warwickshire Yeomanry did not see action there until August 1915. On 14 August 1915 the regiment embarked on the Ascania, where they received inoculations against cholera. Three days later they arrived at Mudros Harbour on the island of Lemnos and transferred to the slower Queen Victoria for the landing at Suvla Bay on the Gallipoli Peninsula.

The Warwickshire Yeomanry, including Arkell and his brother Walford, landed in the small hours of 18 August 1915 at Suvla Bay. They bivouacked on a hill and dug in under the eyes of the Turks. On 20 August they moved out and marched to Lala Baba. The following day they moved on to support an intended advance to Chocolate Hill. The British artillery preparation was inadequate and the attack suffered horrendous casualties. By 5.00pm it had failed and the Warwickshire Yeomanry were called forward from their support positions, having to cross the open ground of the Salt Lake while subjected to shrapnel fire. Arkell had a lucky escape when a piece of shell split his trousers and only grazed his skin, but 170 men of the Warwickshire Yeomanry were killed or wounded. As the troops reached the fields beyond the Salt Lake the order was given to speed up to the double, but casualties continued to mount until the foot of Chocolate Hill was reached. From here the brigade launched an attack on Scimitar Hill but it was repelled by intense fire. The Warwickshire Yeomanry were then withdrawn from the attack and spent the rest of August 1915 in trenches and dugouts under enemy shelling of varying intensity.

In September 1915 Arkell contracted enteric fever and pneumonia and was evacuated to hospital in Alexandria. He had only been in hospital three days when he died on 19 September 1915. He was 30 years old and is buried at Alexandria (Chatby) Military Cemetery in Egypt. He has his name recorded on memorials at Campden Grammar School, Stanton, Mickleton Church and on his parent’s grave in Mickleton churchyard. He was the eldest of five brothers who served during the war.

After his death a memorial service for Arkell was held at St. Lawrence Church in Mickleton on 3 October 1915.