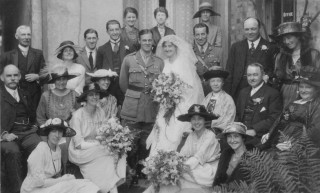 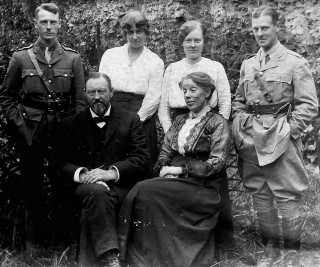 Capt. Wilfred Bright (later Headmaster) with his family, on the occasion of his wedding in 1920

Wilfred was born in Norwich, the youngest son of Thomas and Edith Ellen Bright. His father was a native of Wem in Shropshire and a Primitive Methodist minister. Thomas and Edith had married in 1887 at Bury St. Edmunds where they later ran a company producing mineral water. Thomas died in 1917 and the company was taken over by Wilfred’s brother Frank after he had been discharged from the Royal Air Force.

Wilfred was educated at Bourne College in Birmingham and after a period in Germany he entered Fitzwilliam Hall at Cambridge University in 1910 where he graduated with an MA in History and Modern Foreign Languages in 1913. While he was there he was a member of the Officer Training Corps and a player for Ipswich Town Football Club. After leaving university he became a schoolmaster and taught French and German at Charlton Park in Woolwich. He then taught at a school in Switzerland but had to return to England when the war started in 1914. Back home he joined the staff of Aldenham School, where he became a 2nd lieutenant in their Officer Training Corps. By 1916 he was still at Aldenham and anxious to transfer to the Royal Field Artillery to play a more active part in the war.

He left Aldenham after five terms and joined the Royal Field Artillery as a 2nd lieutenant. A period of training in Edinburgh developed his horse-riding skills before his posting to India to complete his training in Bombay and Karachi. On 14 January 1917 he arrived in Basra in Mesopotamia on board HT Sofala and was posted to Number 2 British Depot at Makina. In May he was admitted to hospital but rejoined his unit the following month. On 10 September he was promoted to lieutenant and on 31 July 1918 to captain, which saw him command a section whose job it was to supply front-line gun batteries with artillery shells. Life in Mesopotamia was “heaven and hell”, too hot during the day and cold at night, which meant that all shells were transported at night.

Wilfred left Mesopotamia on 27 January 1919 and returned to England, where he was discharged from the army on 1 March 1919. He resigned his commission on 19 March 1920. He immediately returned to teaching and found a post at Campden Grammar School, where he met Elizabeth Gertrude Jones, known as “Betty”. Betty taught Geography and sport at the school and was an excellent hockey player. They married in Cardiff in 1920 and had four children: Peter, Derek, Michael and Graham. After a year in Campden Wilfred became Headmaster at West Suffolk County School in Bury St. Edmunds in 1920. In 1927 Matthew Cox retired as Headmaster at Campden Grammar School and Wilfred immediately applied for the vacancy. He was given the post and remained at the school until he retired in 1951. During his time in the town he was a churchwarden, Chief of the Voluntary Fire Brigade, President of Campden’s Festival of Britain Committee, a member of the British Legion and an excellent player for the town football team. During the Second World War he was a special constable.

Wilfred died on 6 March 1978 aged 87 years and is buried in Felixstowe. To commemorate his life a memorial service was held in St. James’s Church on 13 April 1978.