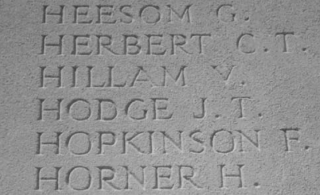 Charles was born in Blockley, the son of George Alfred and Mary Ann Herbert. His father was an ironmonger’s assistant.

He was educated at Campden Grammar School and was a member of the Boy Scouts. In 1915 he helped carry the coffin of Private Benjamin Keen, 2nd Battalion, Gloucestershire Regiment, a fellow Scout, who died of wounds in hospital in England and was buried in Blockley.

In April 1916 Charles made his way to Oxford and enlisted in the Wiltshire Regiment. He was then transferred to the 10th (Labour) Battalion, Royal Berkshire Regiment, which was formed at Portsmouth in May 1916. The battalion arrived in France on 20 June 1916 and in April 1917 it was split into the 158th and 159th Companies of the Labour Corps. Charles joined 159th Company.

A further transfer occurred in 1918 when Charles joined the 2nd/4th Battalion, West Riding Regiment, 62nd (2nd West Riding) Division, and in the summer months the battalions in the division were involved in a series of blows that began to force the enemy into retreat. On 25 August 1918 Mory, south of Arras, was captured and then several determined counter-attacks from the
enemy were repulsed at Vaulx-Vraucourt.

Charles was killed in action in this area, south-east of Arras, near Bapaume, on 30 August 1918. He was 23 years old and as his grave could not be found at the end of the war his name is recorded on the Vis-en-Artois Memorial, near Arras in France. His name is also recorded on the Campden Grammar School memorial and on two memorials in Blockley, in the church and on the village green.