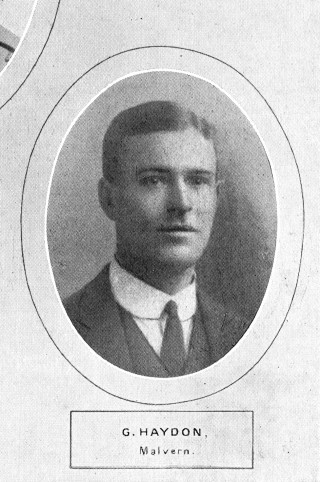 Gilbert was born in Campden, the youngest son of Robert Henry and Ann Haydon of Church Street in Campden. He was baptised at St. James’s Church on 26 August 1888 and educated at Campden Grammar School.

When the war started in 1914 he was working at the Capital and Counties Bank in Malvern. Keen to enlist, he made his way to Gloucester to join the 1st/5th Battalion, Gloucestershire Regiment. A period of training followed in Chelmsford before the battalion arrived in France on 29 March 1915. The next few months were spent learning about trench warfare at Ploegsteert in Belgium before the battalion headed south to the Somme, where Gilbert was killed in action in a German trench near Pozières. The Campden Parish magazine said that he was “killed by the explosion of a shell in the trenches. Death was instantaneous.” The Brigade Chaplain sent the following letter to Gilbert’s parents: “I am very sorry indeed to have to tell you that Pte. Haydon was killed in the German trenches which he helped to capture and hold. I buried him just where he fell early this morning. Please accept our sincere sympathy, and believe me, he did his bit for King and Country.”

On 3 August 1918 the Cheltenham Chronicle and Gloucestershire Graphic published a watercolour sketch of a memorial that had been erected by the 1st/5th Battalion, Gloucestershire Regiment over a trench taken on 27 August 1916, during the Somme Battle, to commemorate three officers and six men who fell in taking it from the Prussian Guard. Gilbert is one of the six men listed on the memorial. This memorial was returned to England after the war and placed in Prestbury Cemetery in Cheltenham. The original memorial fell into a state of disrepair and has been replaced by a new one.

Gilbert’s body was never recovered at the end of the war and his name is listed on the Thiepval Memorial in the heart of the Somme battlefield in France. He was 28 years old when he died and his name is recorded on three memorials in the town: in St. James’s Church, in Campden School and in the High Street.