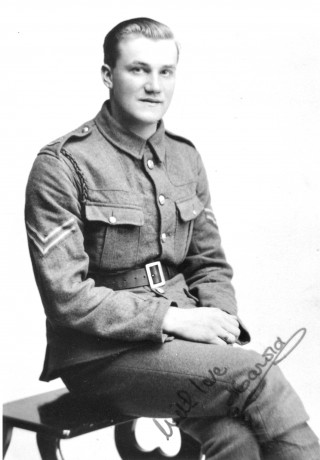 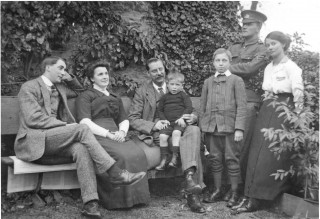 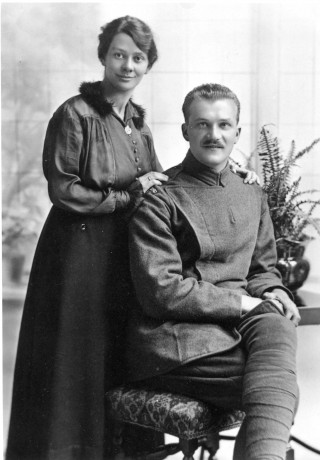 Harold was born in Bow in London in 1893, the eldest son of James William and Emily Pyment. He arrived in Campden as a young boy aged 9 when his parents moved to the town with the Guild of Handicraft in 1902. His father was a cabinetmaker and a senior member of the Guild. When the Guild disbanded and many of the craftsmen left Campden, James bought the Silk Mill in Sheep Street and set up the family business, J. W. Pyment and Sons.

After leaving Campden Grammar School Harold joined his father at the Guild as an apprentice carpenter and cabinetmaker. In his spare time he was a regular member of “H” Company, 5th Battalion, Gloucestershire Regiment, the local company of the Territorial Army. They trained every weekend and went away on annual camp every summer. A lot of time was spent on the rifle range in Broad Campden in fields opposite the Baker’s Arms.

When war was declared in August 1914 Harold immediately volunteered for overseas service with the 5th Glosters and was mobilised on 5 August. Initial training took place in Chelmsford in Essex before they arrived in France on 29 March 1915. The next few months were spent in a “quiet” area of the Western Front, in and around the village of Ploegsteert (“Plugstreet” to the soldiers). This was located at the extreme southern end of the Ypres Salient. Casualties here were very light and all of the Campden men with Harold in the Glosters moved south to the Somme in July 1915. Harold became “time expired” on 12 November 1915 when the initial period of service that he signed up for in 1909 had expired and he returned to England.

Harold married Ethel Harris at St. Mark’s Church, Harlesden, London on 5 June 1916. His wife was originally from Topsham in Devon and she moved to Campden in 1911 as a telegraph clerk at the Post Office, but when the war started she moved to a London branch. Two weeks later he enlisted in the Royal Flying Corps as an air mechanic second class, no doubt influenced by his brother Arthur and other Campden men who had transferred to the RFC from the Glosters, including Harry and Joe Warmington.

Harold served for nearly three years with the RFC before he was finally discharged on 28 February 1919. He rose to the rank of sergeant mechanic in April 1918 and his overseas service was on the Western Front with 36 Wing, RFC.

When he returned to Campden in 1920 he joined his brother and father working in the family business, J. W. Pyment and Sons, builders, cabinetmakers and ecclesiastical woodworkers.

During the Second World War Harold was Head Warden in charge of ARP services in Campden and his wife, Ethel, worked in the services canteen at Bedfont House. He served for twenty-five years on the Campden Bench as a Justice of the Peace, the last being as chairman.

Harold died at the Royal Berkshire Hospital in Reading on 11 June 1978 aged 84 and is buried in St. James’s churchyard. His son, Desmond, saw service during the Second World War and then became an architect.