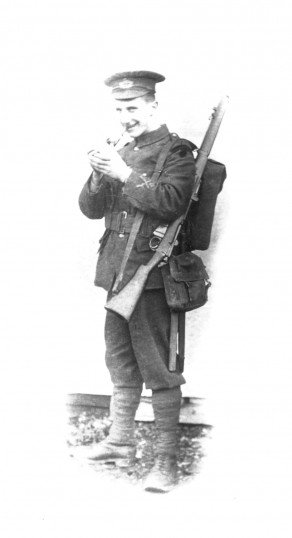 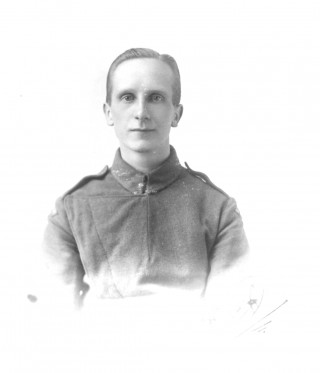 Harry was born in Badsey, the second son of William John and Rose Anne Warmington, and he came to Campden in 1904 when the family moved to Sheep Street. After leaving Campden Grammar School he became a silversmith and, together with his brother Joe, he was a member of “H” Company, 5th Battalion, Gloucestershire Regiment.

Harry joined the Territorials on 18 March 1912 and when war was declared in 1914 he was immediately mobilised. After training in Chelmsford he arrived in Boulogne on 29 March 1915 and served with the 5th Glosters in Belgium at Ploegsteert and in France at Hébuterne on the Somme. The battalion was about to be involved in very heavy fighting in July 1916 at Ovillers when Harry applied for a transfer to join his brother in the Royal Flying Corps. second class on 16 December 1915. He was promoted to air mechanic first class in England three months before he married Florence Turvey on 24 December 1916 at Montrose in Scotland. More promotion followed as Joe continued to serve in England. On 1 April 1918 the Royal Flying Corps were renamed the Royal Air Force and Joe was now a sergeant mechanic.

On 14 August 1918 Joe was posted to France, where he remained until 5 April 1919, when he returned to England with flu. He went straight to University Hospital in Southampton and after recovering he was discharged from the RAF on 12 June 1919.

After the war Joe and Florence had one child, William Allan, who was born in 1922. They lived in Broad Campden for a few years before they moved to Westington Corner in 1927. Joe was now working on his own as a builder and cabinetmaker.

During the Second World War Joe helped organise the fire-watching service in Campden and he was involved with servicemen’s welfare through Toc H and the soldiers’ canteen.

Harry enlisted in the Royal Flying Corps on 27 June 1916 as an air mechanic second class. While serving in England he was promoted to air mechanic first class in March 1917. Embarkation to France was on 28 March 1918 but by August he was back in England as he married Elizabeth Salmon from Clifford Chambers on 5 August 1918.

He was discharged from the Royal Air Force on 15 March 1919 and he returned to Campden, where he and his wife lived with his parents in Sheep Street until 1926. They then had a number of homes in Campden, including Little Broadwell, Landgate Cottage and Clifton Cottage.

In post-war years Harry developed into an expert silversmith, goldsmith and engraver. George Hart described him as “one of the finest silver and goldsmiths in the country”. He was the metalwork instructor at the Campden School of Arts and Crafts for twenty years and continued to work at the Silk Mill in Campden until he was 70 years old.

He was a very keen member and former president of Campden Bowls Club, to which he belonged for fifty years, and he also represented the County. He was an active member of the British Legion and in 1935 he joined the Campden Lodge of Freemasons and was its Master in 1946.

During the Second World War he worked as a supervisor at the Lockhead Brake Factory at Cutt’s Garage in Campden. He was also a special constable.