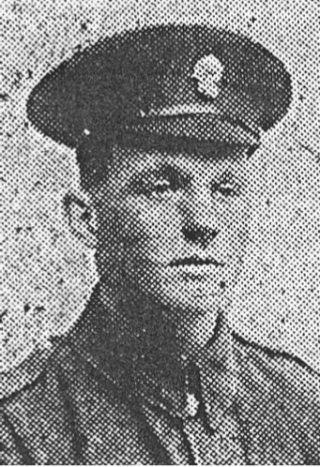 Raywood was born at Campden Grammar School, the eldest son of Francis Bazley and Mary Ann Osborne, and was baptised at St. James’s Church on 1 June 1890. He was educated at Campden Grammar School, where his father was headmaster, and then at Christ’s Hospital in Horsham. In 1906 he obtained a clerkship in the Capital and Counties Bank in Gloucester before he moved successively to branches in Shrewsbury, Ludlow, Lydney and finally to Head Office in Threadneedle Street in London. He was a member of the Institute of Bankers.

At the outbreak of war Raywood enlisted in the 10th Battalion (Stockbrokers’ Battalion), Royal Fusiliers in London and in September 1914 he was gazetted to a commission in the Army Service Corps. This he declined as it was a non- fighting unit. In 1915 he was again offered a commission but this time in his own battalion, which he again refused as it entailed a longer stay in England.

Raywood arrived in France as a sergeant on 13 October 1915. On the night of 4 May 1916 he was in charge of his platoon at Monchy-au-Bois, south-west of Arras, when the Germans made a surprise attack. Though wounded, he refused to leave his men. He was wounded a second time and was being carried away by the stretcher-bearers when he was hit for a third time by a shell splinter. His wounds were fatal and he died soon afterwards.

The Evesham Journal reported his death:

“There is much sympathy in Blockley, Campden and Evesham with Mr. and Mrs. F. B. Osborne, of Malvern House, Blockley whose elder son, Sgt. F. Raywood Osborne, was killed in action in France on Thursday. The deceased was a man of great promise and he had many friends in the district who will mourn his loss. He was the nephew of Mrs. Crisp, of Evesham Post Office, who lost her only son in the war (2nd Lieutenant Ernest Geoffrey Crisp).”

Raywood’s brother, Alec William Osborne, was in a trench behind him and went to see what had happened to his brother and found that the shell had hit him in the chest. He was later buried alongside five of his comrades in Berles-au-Bois Churchyard Extension in France. He was 26 years old when he died and his name is recorded on three memorials in Campden (in St. James’s Church, in Campden School and in the High Street) and on two memorials in Blockley (in Blockley Church and on the village green).