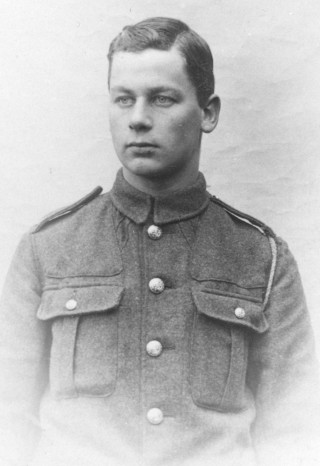 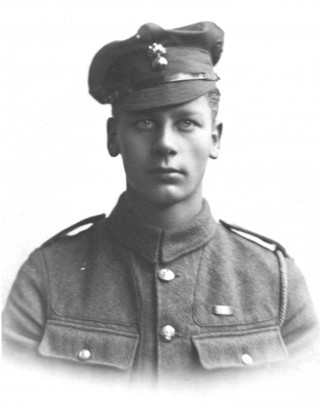 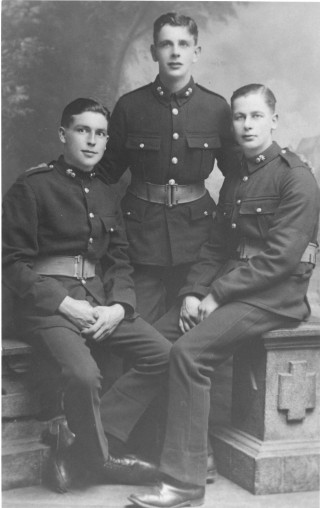 Michael was born in Campden, the second son of William Thomas and Lily Grove of Church Cottages, Campden, and was baptised at St. James’s Church on 3 December 1899. His father was a stonemason by trade.

Michael was a member of the Boys’ Brigade and educated at Campden Grammar School. He left school when he was 15 years old owing to the outbreak of war and as there was very little work about in Campden he got a job at Evesham International Stores and lodged in Evesham during the week. When one of his friends went to enlist in the army at Norton Barracks Michael joined him. He gave a false age and enlisted in the Worcestershire Regiment.

He was sent to the Worcestershire Training Depot in Davenport for initial army training before he arrived at Le Havre in France on 16 December 1915 with a draft of men to reinforce the 1st Battalion, Worcestershire Regiment. When his mother found out where he was she wrote to the Colonel of the Regiment informing him that her sone was under age. He was put on a train Noeux-les-Mines and then boarded a ship to Le Havre.

After returning to England Michael went to work in a munitions factory in Birmingham before he returned to Campden and found employment at the Guild. He was unsettled and as he was almost 18 years old he put his age up a little and enlisted in the Royal Marine Artillery at Bristol on 4 May 1917. They said that he could only be accepted if he signed on for 12 years, although he was told that there was going to be free discharge at the end of the war as they were likely to be over strength for peacetime service. He trained at Eastney Barracks in Portsmouth and after he had volunteered for land service he returned to France. He embarked at Dover and arrived at Calais on 31 May 1918. Apart from a period of leave in January 1919 he remained on the Western Front until 14 June 1919, when he returned to Portsmouth.

After his discharge Michael went to South Wales in search of work but soon returned to Campden and joined the Territorial Army as a corporal with the Worcestershire Regiment. Times were hard in the post-war years and after struggling to find regular work in Campden he joined the Red Star Liner Lapland as a steward in 1922 and worked on two trips to New York. In 1924 he was back in Campden and working fro J. W. Pyment and Sons doing masonry and stone carving. He then married Edith Annie Benfield. The had two childen, Robert and Tony, and the family home was at 3 West End Terrace.

As the Second World War approached work was again in short supply. The state was advertising for volunteers to work on the defences in Belgium and in 1940 he went to Clacton for trade tests. He was accepted and was posted to Number 4 Section, 660 General Construction Company, Royal Engineers. He was initially employed in North Scotland before he was issued with tropical kit and sailed from Liverpool for the Middle East. On one occasion he was repairing a marble statue in Egypt when Sir Winston Churchill, who was in the area at the time, came over to have a word with him.

After returning safely to Campden at the end of the war he continued working as a stonemason in partnership with two of his brothers, Robert and Frank.

Michael died on 23 August 1979 aged 79 years and is buried in St. James’s churchyard in Campden.